The Hangay Dome is a mountain range in Mongolia that is interesting for several reasons – among them its unique look. The range contains numerous summit plateaus, which make it look as though someone took a gigantic belt sander to the tops of mountains and filed them flat. The Hangay fascinates geologists not just because of its appearance, but because its formation – and its age – have been relatively hard to define.

New methods are allowing researchers to create a picture of what the Hangay looked like when it first formed – and giving geologists a more dependable way to uncover its history and age.

The Hangay’s formation is interesting because it’s what geologists refer to as an “intraplate” mountain belt. Mountain ranges are usually formed as the crust of the Earth is pushed upward along the margins of tectonic plates, where they are either converging or pulling apart. The Hangay isn’t along one of these intersecting plate boundaries, so geologists can’t use plate tectonic reconstructions to date the formation. As a result, age estimates range from 5 million to perhaps 50 million years old, and theories about the formation cover everything from an upwelling mantle plume (picture a giant magma bubble pushing up against the crust) to delamination, where a piece of the crust detaches from the continent, allowing partially molten rock from the asthenosphere to fill in beneath it and lift it.

Enter NC State geologist Karl Wegmann, former Ph.D. student Stephen Smith, and colleagues at Lehigh University. The researchers knew that between 5 million and 15 million years ago, lava flows filled in the valleys between the mountains with basalt. During the subsequent glacial period (beginning about 2.5 million years ago), glaciers carved out portions of the basalt and the mountains’ own granite, which revealed cross-sections of valleys that were previously filled in with lava.

Wegmann and Smith used satellite imagery from the Hangay Mountains to differentiate the basalt from the granite. Different rock types reflect light differently. By analyzing the spectral signatures returned from the exposed rock across the Hangay Mountains the team could pinpoint the basalt, and then digitally remove the basalt flows to reveal what the landscape looked like between 13 and 15 million years ago – essentially erasing the present in order to see the past.

“We could see that the Hangay wasn’t a flat plain at that time,” Wegmann says. “There was a mountain range with valleys just as deep as the ones there now – the ridgelines were about 2,000 feet above the valleys. The range we see today is most likely due to erosion rather than uplift, and the previous mountains were uplifted between 20 and 25 million years ago.” 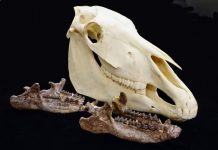 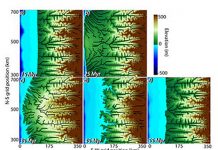 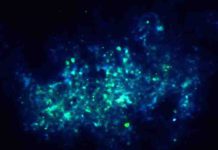 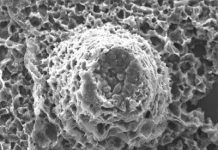