For a long time, geoscientists have assumed that the Alps were formed when the Adriatic plate from the south collided with the Eurasian plate in the north. According to the textbooks, the Adriatic plate behaved like a bulldozer, thrusting rock material up in front of it into piles that formed the mountains. Supposedly, their weight subsequently pushed the underlying continental plate downwards, resulting in the formation of a sedimentary basin in the north adjacent to the mountains — the Swiss Molasse Plateau. Over time, while the mountains grew higher the basin floor sank deeper and deeper with the rest of the plate.

A few years ago, however, new geophysical and geological data led ETH geophysicist Edi Kissling and Fritz Schlunegger, a sediment specialist from the University of Bern, to express doubts about this theory. In light of the new information, the researchers postulated an alternative mechanism for the formation of the Alps.

Altitude of the Alps has barely changed

Kissling and Schlunegger pointed out that the topography and altitude of the Alps have barely changed over the past 30 million years, and yet the trench at the site of the Swiss Plateau has continued to sink and the basin extended further north. This leads the researchers to believe that the formation of the Central Alps and the sinking of the trench are not connected as previously assumed.

They argue that if the Alps and the trench indeed had formed from the impact of two plates pressing together, there would be clear indications that the Alps were steadily growing. That’s because, based on the earlier understanding of how the Alps formed, the collision of the plates, the formation of the trench and the height of the mountain range are all linked.

Recommended For You  Probing the mysteries of Europa, Jupiter's cracked and crinkled moon

Furthermore, seismicity observed during the past 40 years within the Swiss Alps and their northern foreland clearly documents extension across the mountain ranges rather than the compression expected for the bulldozing Adria model.

This denotes the begin of the so-called continent-continent collision with the Adriatic microplate and the European upper, lighter crust separates from the heavier, underlying lithospheric mantle. Because it weighs less, the Earth’s crust surges upwards, literally creating the Alps for the first time around 30 Ma ago. While this is happening, the lithospheric mantle sinks further into the Earth’s mantle, thus pulling the adjacent part of the plate downwards.

This theory is plausible because the Alps are mainly made up of gneiss and granite and their sedimentary cover rocks like limestone. These crustal rocks are significantly lighter than the Earth’s mantle — into which the lower layer of the plate, the lithospheric mantle, plunges after the detachment of the two layers that form the continental plate. “In turn, this creates strong upward forces that lift the Alps out of the ground,” Kissling explains. “It was these upward forces that caused the Alps to form, not the bulldozer effect as a result of two continental plates colliding,” he says.

Recommended For You  Continental crust thanks to the right mixture

To investigate the lift hypothesis, Luca Dal Zilio, former doctoral student in ETH geophysics professor Taras Gerya’s group, has now teamed up with Kissling and other ETH researchers to develop a new model. Dal Zilio simulated the subduction zone under the Alps: the plate tectonic processes, which took place over millions of years, and the associated earthquakes.

“The big challenge with this model was bridging the time scales. It takes into account lightning-fast shifts that manifest themselves in the form of earthquakes, as well as deformations of the crust and lithospheric mantle over thousands of years,” says Dal Zilio, lead author of the study recently published in the journal Geophysical Research Letters.

According to Kissling, the model is an excellent way to simulate the uplifting processes that he and his colleague are postulating. “Our model is dynamic, which gives it a huge advantage,” he says, explaining that previous models took a rather rigid or mechanical approach that did not take into account changes in plate behaviour. “All of our previous observations agree with this model,” he says.

The model is based on physical laws. For instance, the Eurasian plate would appear to subduct southwards. In contrast to the normal model of subduction, however, it doesn’t actually move in this direction because the position of the continent remains stable. This forces the subducting lithosphere to retreat northwards, causing the Eurasian plate to exert a suction effect on the relatively small Adriatic plate.

Kissling likens the action to a sinking ship. The resulting suction effect is very strong, he explains. Strong enough to draw in the smaller Adriatic microplate so that it collides with the crust of the Eurasian plate. “So, the mechanism that sets the plates in motion is not in fact a pushing effect but a pulling one,” he says, concluding that the driving force behind it is simply the pull of gravity on the subducting plate.

“Current seismic models are based on statistics,” Dal Zilio says, “whereas our model uses geophysical laws and therefore also takes into account earthquakes that occur only once every few hundreds of years.” Current earthquake statistics tend to underestimate such earthquakes. The new simulations therefore improve the assessment of earthquake risk in Switzerland. 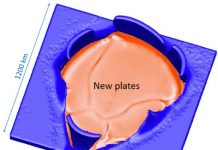 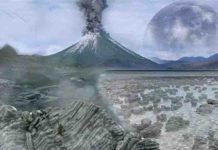 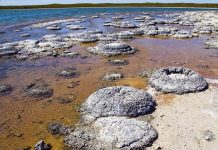 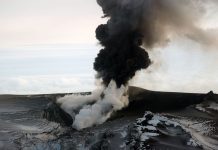