The sex life of the biggest bird to have ever roamed the planet has been revealed – and it’s more akin to a goose than an emu.

The mighty mihirung Dromornis stirtoni, an extraordinary kind of fowl, was most likely a family oriented bird that mated for life, the females brooded the eggs, and both sexes aggressively defended nests and shared parental care.

Unlike most of the large flightless birds that survive today, which are ratites and include the emu, the male mihirungs were larger than the females.

“It was probably the largest bird ever to have lived. With an average weight of 480kg, it was more than ten times the weight of an emu,” Mr Handley says.

An international team of scientists, led by researchers at Flinders University, have unlocked the sex secrets of the mihirungs from bone fragments.

Published in the highly regarded Journal of Vertebrate Paleontology, the discovery of evidence in the bones of egg-laying was the key to distinguishing the gender and breeding characteristics that establish the mihirung as a breed apart from most other fowl.

Flinders University researcher Warren Handley says the largest of these Australian flightless giants, Stirton’s mihirung, stood some three metres tall and could weigh more than half a tonne.

Mr Handley says the mihirung had little to fear.

“With their formidable height and huge size, especially of males that may have exceeded 600kg, they were capable of protecting the growing chicks from predators, such as the dog-sized ancestral thylacines and marsupial lions that were around at the time.”

The largest of all mihirungs roamed Australia about eight million years ago. The bones in the study were those of individuals which died in their dozens around a shrinking waterhole in the Northern Territory along with many marsupials, including sheep-to-cow sized herbivores and their predators, distant relatives of the marsupial lion.

The remnant bones, although fractured and fragmented by the ravages of time, remain awe-inspiring, according to the researchers.

Initially, two size groups among the bones led the researchers to consider whether they were looking at two species, but the discovery of medullary bone, a specialist type of tissue found only in the hollow bones of female birds before they lay eggs, enabled them to identify the smaller bones as female.

Sections of the bones were then sent to South Africa for preparation by histologist Professor Chinsamy-Turan, and microscopy revealed the tell-tale medullary bone. She said “It was quite a surprise to find that four of the birds in our sample had medullary bone. This discovery was a real scoop since we now could say with certainty that these were egg-laying female mihirungs.”

Scientists have long wondered about the sexual behaviour in extinct groups of birds, and the new evidence provided by the bones shows that mihirungs were sexually dimorphic, with females being smaller than males.

The bones, which are held at the Museum of Central Australia in Alice Springs, were originally collected from Alcoota in the Northern Territory. The NT Government recently announced $4 million of funding for further development of the extraordinarily rich fossil site.

“This study provides a spectacular example of how the integration of multidisciplinary techniques and collaboration can reveal details of the biology of long extinct animals from their fragmented osseous remains,” says Dr Trevor Worthy, palaeontologist and Postdoctoral Fellow in the School of Biological Science at Flinders University. 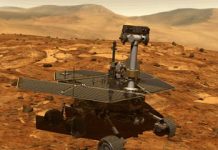 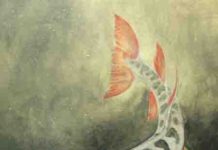 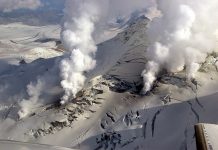 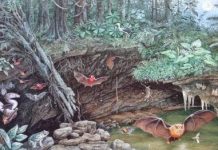