Everyone likes “gross” fossils. Fossil poo always gets attention, and infected bones are cool to look at, but vomit is fairly unusual in the fossil record. One of the best known examples (at least to paleontologists with a very narrow range of interests) is around 220 million years old, from northern Italy. Not only was it interpreted as prehistoric throw-up, but the contents were identified as a rare animal indeed–tiny, fragile bones from a winged pterosaur. This is potentially quite exciting, because pterosaurs of that age are poorly known. Such an unusual specimen warranted a second look!

Yesterday in PLOS ONE, a team of researchers (including one of the scientists from the original 1989 study) published a reinterpretation of that infamous pterosaur-containing vomit. And…it may not have a pterosaur after all.

First things first, let’s address the nature of the vomity fossil. The technical term is “gastric pellet.” Gastric pellets are composed of indigestible bones and tissue regurgitated by an animal (typically a predator). Owl pellets are probably the best known example, but a number of other animals produce them. In the fossil record, gastric pellets are distinguished from poo (which also contains indigestible bits) by the degree of damage to the contents, among other criteria. Something regurgitated out the front end will have less damage from digestive acids and enzymes than something excreted out the back end. Coprolites will also often be accompanied by a mass of mineralized bits and pieces, lacking in the Italian specimen. Tight clumping of bones can help differentiate a gastric pellet from random skeletal accumulations brought together by currents or from the decay of a single organism. Overall, the authors of the PLOS ONE paper upheld the nature of the Italian fossil as a gastric pellet.

The next question concerns the identity of the bones in the gastric pellet. The original research team tentatively identified the bones as pterosaur based on their size and shape–the number and shape of long, slender bones seemed to match the wing bones of a pterosaur. Restudy of the bones, however, suggested that some of the long bones could just as easily have come from some other reptiles around at the same time. Critically, a vertebra and tail bone (hemapophysis, also known as a chevron or haemal arch) were found to be a very poor match for those known in pterosaurs. Former “wing bones” were also reinterpreted as broken ribs or other limb bones, not necessarily from pterosaurs. A number of other presumed pterosaur features were found to be either ambiguous or found across enough other animals to be uninformative.

So if they’re not pterosaur, what did the bones come from? In terms of size and shape, the best candidate is one of the small lizard-like animals of the time, particularly a group called protosaurs. The preserved bones in the gastric pellet aren’t quite complete enough to be certain, but odds are good. Even so, the producer of the pellet itself remains a mystery.

Reference:
Borja Holgado et al. A Reappraisal of the Purported Gastric Pellet with Pterosaurian Bones from the Upper Triassic of Italy, PLOS ONE (2015). DOI: 10.1371/journal.pone.0141275 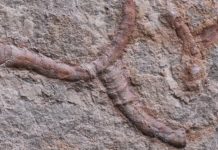 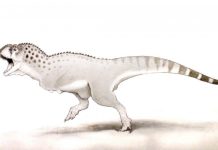 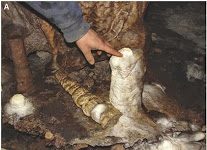