A new study published in the journal Nature Geoscience has identified 70 volcanic features scattered across the lunar surface, all younger than 100 million years old.

However, the discovery of previously unknown geologic features shows that the Moon has seen small eruptions of basaltic lava during the past 100 million years.

These features, termed irregular mare patches (0.1–5 km wide), are too small to be seen from our planet.

One of the largest, a well-studied area called Ina, was imaged from lunar orbit by Apollo 15 astronauts in the 1970s.

Some early studies indicated that Ina could be very young (10 million years or less), but only a few irregular mare patches were known then, and their significance was unclear.

The ages of the 70 irregular mare patches come from previous studies of crater sizes and numbers within a given area. These crater-counting dates are linked to lab ages provided by Apollo and Luna samples.

The results show that instead of volcanism stopping abruptly about a billion years ago, it ended more gradually, continuing until less than 50 million years ago.

“The existence and young age of the irregular mare patches provides a new constraint for models of the lunar interior’s thermal evolution. The lunar mantle had to remain hot enough for long enough to provide magma for the small-volume eruptions,” said study lead author Dr Sarah Braden of Arizona State University.

These young volcanic features are now prime targets for future exploration, both robotic and human.

Note : The above story is based on materials provided by Sci-News 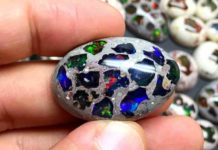