Boulder, Colo., USA – The rise of the Tibetan plateau — the largest topographic anomaly above sea level on Earth — is important for both its profound effect on climate and its reflection of continental dynamics. In this study published in GSA Bulletin, Katharine Huntington and colleagues employ a cutting-edge geochemical tool — “clumped” isotope thermometry — using modern and fossil snail shells to investigate the uplift history of the Zhada basin in southwestern Tibet.

Views range widely on the timing of surface uplift of the Tibetan Plateau to its current high (~4.5 km) over more than 2.5 square kilometers. Specifically, interpretations differ on whether the modern high elevations were recently developed or are largely a continuation of high elevations developed prior to Indo-Asian collision in the Eocene.

Clumped isotope temperatures of modern and fossil snail shells record changing lake water temperatures over the last nine million years. This is a reflection of changes in surface temperature as a function of climate and elevation change. A key to their Zhada Basin paleo-elevation reconstructions is that Huntington and colleagues were able to contextualize them with sampling of modern and Holocene-age tufa and shells from a range of aquatic environments.

Huntington and colleagues find that the Zhada basin was significantly colder from three to nine million years ago, implying a loss of elevation of more than one kilometer since the Pliocene. While surprising given the extreme (~4 km) elevation of the basin today, the higher paleo-elevation helps explain paleontological evidence of cold-adapted mammals living in a high-elevation climate, and is probably the local expression of east-west extension across much of the southern Tibetan Plateau at this time.

Huntington and colleagues note that future studies could improve on their own initial “calibration” work with year-round monitoring of water temperature and a focus on specific taxa and their micro-habitat preferences. 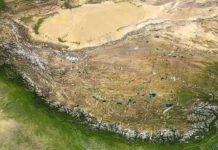 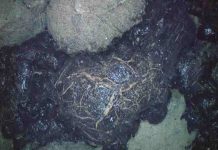 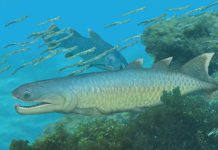 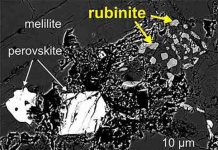