Chemical Formula: Na2KLi(Fe2+,Mn2+)2Ti2(Si8O24)
Locality: Benitoite mine, San Benito, Co., California, USA.
Name Origin: Named for Neptune, the Roman god of the sea, because it was found with aegirine, named for the Scandinavian god of the sea.

Neptunite is a silicate mineral with the formula Na2KLi(Fe2+,Mn2+)2Ti2(Si8O24). With increasing manganese it forms a series with mangan-neptunite. Watatsumiite is the variety with vanadium replacing the titanium in the formula.

It was first described in 1893 for an occurrence in the Narssârssuk pegmatite of West Greenland. It is also found within natrolite veins in glaucophane schist within serpentinite in San Benito County, California, USA. It also occurs in Mont Saint-Hilaire, Quebec and in the Kola Peninsula of Russia.

The mineral is named for Neptune, Roman god of the sea because of its association with aegirine from Àgir, the Scandinavian sea-god.

The Gemological Institute of America (GIA) identified an 11.78-carat faceted specimen as neptunite based on Raman spectroscopy. 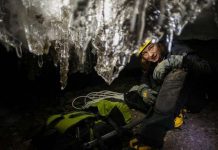