Some of the major cities along the length of the arc include Portland, Seattle, and Vancouver, and the population in the region exceeds 10,000,000. All could be potentially affected by volcanic activity and great subduction-zone earthquakes along the arc. Because the population of the Pacific Northwest is rapidly increasing, the Cascade volcanoes are some of the most dangerous, due to their past eruptive history, potential eruptions and because they are underlain by weak, hydrothermally altered volcanic rocks that are susceptible to failure. Mount Rainier is one of the Decade Volcanoes due to the danger it poses to Seattle and Tacoma. Many large, long-runout landslides originating on Cascade volcanoes have inundated valleys tens of kilometers from their sources, and some of the inundated areas now support large populations.

The Cascade Volcanoes are part of the Pacific Ring of Fire, the ring of volcanoes and associated mountains around the Pacific Ocean. All of the known historic eruptions in the contiguous United States have been from the Cascade Volcanoes. Two most recent were Lassen Peak in 1914 to 1921 and a major eruption of Mount St. Helens in 1980. It is also the site of Canada’s most recent major eruption about 2,350 years ago at the Mount Meager volcanic complex.

The Cascade Arc includes nearly 20 major volcanoes, among a total of over 4,000 separate volcanic vents including numerous stratovolcanoes, shield volcanoes, lava domes, and cinder cones, along with a few isolated examples of rarer volcanic forms such as tuyas. Volcanism in the arc began about 37 million years ago, however, most of the present-day Cascade

Over the last 37 million years, the Cascade Arc has been erupting a chain of volcanoes along the Pacific Northwest. Several of the volcanoes in the arc are frequently active. The volcanoes of the Cascade Arc share some general characteristics, but each has its own unique geological traits and history. Lassen Peak in California, which last erupted in 1917, is the southernmost historically active volcano in the arc, while Mount Meager in British Columbia, which erupted about 2,350 years ago, is generally considered the northernmost member of the arc. A few isolated volcanic centers northwest of Mount Meager such as the Silverthrone Caldera, which is a circular 20 km wide, deeply dissected caldera complex, may also be the product of Cascadia subduction because andesite, basaltic andesite, dacite and rhyolite can be found at these volcanoes and elsewhere along the subduction zone. At issue are the current plate configuration and rate of subduction but based on chemistry is for these volcanoes to be subduction related and are therefore part of the Cascade Volcanic Arc. The Cascade Volcanic Arc appears to be segmented; the central portion of the arc is the most active and the northern end least active.

Lavas representing the earliest stage in the development of the Cascade Volcanic Arc mostly crop out south of the North Cascades proper, where uplift of the Cascade Range has been less, and a thicker blanket of Cascade Arc volcanic rocks has been preserved. In the North Cascades, geologists have not yet identified with any certainty any volcanic rocks as old as 35 million years, but remnants of the ancient arc’s internal plumbing system persist in the form of plutons, which are the crystallized magma chambers that once fed the early Cascade volcanoes. The greatest mass of exposed Cascade Arc plumbing is the Chilliwack batholith, which makes up much of the northern part of North Cascades National Park and adjacent parts of British Columbia beyond. Individual plutons range in age from about 35 million years old to 2.5 million years old. The older rocks invaded by all this magma were affected by the heat. Around the plutons of the batholith, the older rocks recrystallized. This contact metamorphism produced a fine mesh of interlocking crystals in the old rocks, generally strengthening them and making them more resistant to erosion. Where the recrystallization was intense, the rocks took on a new appearance dark, dense and hard. Many rugged peaks in the North Cascades owe their prominence to this baking. The rocks holding up many such North Cascade giants, as Mount Shuksan, Mount Redoubt, Mount Challenger, and Mount Hozomeen, are all partly recrystallized by plutons of the nearby and underlying Chilliwack batholith.

The Pemberton Volcanic Belt is an eroded volcanic belt north of the Garibaldi Volcanic Belt, which appears to have formed during the Miocene before fracturing of the northern end of the Juan de Fuca Plate. The Silverthrone Caldera is the only volcano within the belt that appears related to seismic activity since 1975.

The Garibaldi Volcanic Belt is the northern extension of the Cascade Arc. Volcanoes within the volcanic belt are mostly stratovolcanoes along with the rest of the arc, but also include calderas, cinder cones, and small isolated lava masses. The eruption styles within the belt range from effusive to explosive, with compositions from basalt to rhyolite. Due to repeated continental and alpine glaciations, many of the volcanic deposits in the belt reflect complex interactions between magma composition, topography, and changing ice configurations. Four volcanoes within the belt appear related to seismic activity since 1975, including: Mount Meager, Mount Garibaldi and Mount Cayley.

Mount Meager is the most unstable volcanic massif in Canada. It has dumped clay and rock several meters deep into the Pemberton Valley at least three times during the past 7,300 years. Recent drilling into the Pemberton Valley bed encountered remnants of a debris flow that had travelled 50 kilometers from the volcano shortly before it last erupted 2350 years ago. About 1,000,000,000 m³ of rock and sand extended over the width of the valley. Two previous debris flows, about 4,450 and 7,300 years ago, sent debris at least 32 kilometers from the volcano. Recently, the volcano has created smaller landslides about every ten years, including one in 1975 that killed four geologists near Meager Creek. The possibility of Mount Meager covering stable sections of the Pemberton Valley in a debris flow is estimated at about one in 2400 years. There is no sign of volcanic activity with these events. However scientists warn the volcano could release another massive debris flow over populated areas anytime without warning.

In the past, Mount Rainier has had large debris avalanches, and has also produced enormous lahars due to the large amount of glacial ice present. Its lahars have reached all the way to the Puget Sound. Around 5,000 years ago, a large chunk of the volcano slid away and that debris avalanche helped to produce the massive Osceola Mudflow, which went all the way to the site of present-day Tacoma and south Seattle. This massive avalanche of rock and ice took out the top 1,600 feet (500 m) of Rainier, bringing its height down to around 14,100 feet (4,300 m). About 530 to 550 years ago, the Electron Mudflow occurred, although this was not as large-scale as the Osceola Mudflow.

While the Cascade volcanic arc (a geological term) includes volcanoes such as Mount Meager and Mount Garibaldi, which lie north of the Fraser River, the Cascade Range (a geographic term) is considered to have its northern boundary at the Fraser.

The Cascade Volcanoes were formed by the subduction of the Juan de Fuca, Explorer and the Gorda Plate (remnants of the much larger Farallon Plate) under the North American Plate along the Cascadia subduction zone. This is a 680 mi (1,094 km) long fault, running 50 mi (80 km) off the west-coast of the Pacific Northwest from northern California to Vancouver Island, British Columbia. The plates move at a relative rate of over 0.4 inches (10 mm) per year at a somewhat oblique angle to the subduction zone.

Because of the very large fault area, the Cascadia subduction zone can produce very large earthquakes, magnitude 9.0 or greater, if rupture occurred over its whole area. When the “locked” zone stores up energy for an earthquake, the “transition” zone, although somewhat plastic, can rupture. Thermal and deformation studies indicate that the locked zone is fully locked for 60 kilometers (about 40 miles) downdip from the deformation front. Further downdip, there is a transition from fully locked to aseismic sliding.

Unlike most subduction zones worldwide, there is no oceanic trench present along the continental margin in Cascadia. Instead, terranes and the accretionary wedge have been uplifted to form a series of coast ranges and exotic mountains. A high rate of sedimentation from the outflow of the three major rivers (Fraser River, Columbia River, and Klamath River) which cross the Cascade Range contributes to further obscuring the presence of a trench. However, in common with most other subduction zones, the outer margin is slowly being compressed, similar to a giant spring. When the stored energy is suddenly released by slippage across the fault at irregular intervals, the Cascadia subduction zone can create very large earthquakes such as the magnitude 9 Cascadia earthquake of 1700. 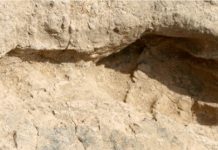 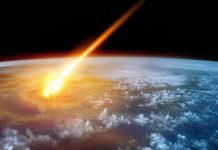 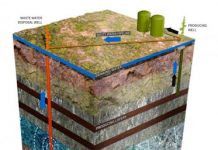 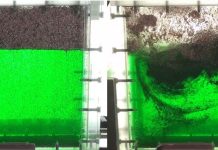