Some good scientific sleuthing by an undergraduate at The University of Texas at Austin has helped rewrite one of the earliest chapters in the planet’s evolutionary history. The research, led by the UT Jackson School of Geosciences, has shown that the millipede thought to be the world’s oldest known air-breathing land creature is in fact about 14 million years younger than previously thought and cannot be the original land breather.

The paper was published June 28 in the journal PLOS ONE. The study focuses on a species of millipede called Pneumodesmus newmani, which was thought to have been breathing air on solid ground during the late Silurian period some 428 million years ago. All other animal fossils discovered before this time have been from animals that lived and breathed under water.

The millipede fossil was discovered by an amateur paleontologist in 2004 in Aberdeenshire, Scotland, and dated by testing plant spores in sediment found in the general area, a method that contains a significant amount of scientific uncertainty compared with radiometric dating methods, said Elizabeth Catlos, a study author and associate professor in the Jackson School’s Department of Geological Sciences.

“The 428 million year age wasn’t obtained using radiometric techniques because no one could get the radioactive minerals out of these soils,” she said.

Catlos, who obtained the soil samples from co-author Michael Brookfield of the University of Massachusetts Boston, tasked Jackson School senior Stephanie Suarez, the paper’s lead author, with finding grain-sized zircons in the sediment that could be dated in the Jackson School’s Laser Ablation Inductively Coupled Plasma Mass Spectrometry Laboratory. Zircons are minerals that trap radioactive elements inside of them when they form, which can help scientists more accurately determine the age of rock or sediment where they’re found.

The zircon samples were from ancient volcanic ash beds directly above and below where the millipede specimen was found. Brookfield, who is from Scotland, said he has been collecting samples from the area since he was a teenager and has long been interested in more precisely dating the sediment where the well-known specimen was discovered.

This job was particularly challenging because the clay sediment Brookfield sent to the Jackson School was loose in plastic bags and unlike the solid rock that Catlos is used to studying. Suarez, who was introduced to the geosciences in high school as part to the Jackson School’s GeoFORCE outreach program, initially tried the standard method of heavy mineral separation, which involves crushing the rock and using bromoform (an organic solvent) to separate out heavier minerals.

“When I attempted it, the ashes clumped together, and no zircons sank to the bottom,” she said. “It was very messy and unsuccessful.”

Undeterred, Suarez combed scientific literature looking for ideas and came across a 2014 study led by Gregory Hoke of Syracuse University that pioneered a method of isolating nonclay components from clay-rich material by constructing and using an ultrasonic clay separator.

“I had to get creative,” Suarez said. “We have a very small sonicator in our lab that we use to clean thin sections. I used that, a Tupperware container and some hydrogen peroxide. It worked. I was very excited.”

Ultimately, Suarez was able to collect 74 zircons to be analyzed and dated. More than 10 of the zircons were younger than 428 million years ago, with the youngest being about 414 million years old. This places the specimen in a completely different geologic era, the Devonian, a classification that bursts the millipede’s uniqueness. Many fossils of land-breathing organisms, mainly insects and arthropods, have been recovered from this era.

Catlos expects the results to raise a few eyebrows, but she said the beauty of published science is that others can replicate the experiment. The handful of zircons found to be younger than 428 million years old definitely show that the Pneumodesmus newmani specimen was not the first organism on Earth to breathe air while on land.

“This wasn’t it,” Catlos said. “We have to keep looking.” 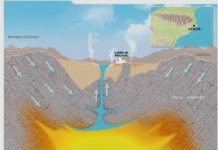 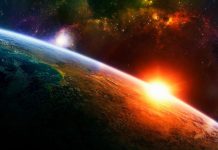