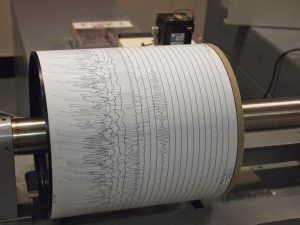 A one-year seismic hazard model for 2017, from the U.S. Geological Survey, forecasts lower damaging ground shaking levels in the central and eastern U.S. compared to the previous forecast, in areas where there have been numerous earthquakes induced by wastewater disposal from industrial activities.

Despite the recent drop in earthquake rates, Oklahoma and southern Kansas still face a significant risk of induced earthquake damage in 2017, according to the USGS report published March 1 in the journal Seismological Research Letters.

For more than 3 million people in Oklahoma and southern Kansas, the chance of damage in the next year from induced earthquakes is similar to that of natural earthquakes in high-hazard areas of California, the report concludes. Ground shaking caused by a quake is considered damaging if it is strong enough to crack plaster and weak masonry.

The 2017 forecast is the follow-up to a similar report in 2016, which was the first to consider seismic hazards from both induced and natural earthquakes in the central and eastern U.S. over a one-year timeframe. USGS’ Mark Petersen and colleagues found that there were lower rates of earthquakes in 2016 compared to 2015 in five key areas: Oklahoma-Kansas, the Raton Basin along the Colorado-New Mexico border, north Texas, north Arkansas, and the New Madrid seismic zone (which ruptures in natural earthquakes) extending from Illinois to Mississippi.

The decreased rate may be due to a decrease in wastewater injection from oil and gas production, the USGS researchers noted. When wastewater produced by oil and gas production is returned to the ground, it creates changes in pressure along faults, unclamping them and allowing them to slip. Seismologists think that the volume of wastewater, along with the rate at which it is injected back into the ground, are important factors in whether an earthquake is triggered by the activity.

Wastewater injection in this region may have decreased in 2016 due to new regulations for its disposal, or slowed due to lower oil prices and less overall production.

“We understand, for example, that there were industry regulations introduced in Oklahoma [in 2016] by the Oklahoma Corporation Commission, that reduced the amount of injection in some areas by up to 40 percent,” Petersen explained.

Last year’s forecast performed well in many respects, said Petersen. In Oklahoma, for instance, all 21 of the magnitude 4 or larger earthquakes in the catalog occurred within the area designated as the highest hazard area of the 2016 forecast. Oklahoma experienced three M 5+ earthquakes in 2016, including the magnitude 5.8 earthquake near Pawnee that was the largest earthquake ever recorded in the state.

The model also correctly forecasted that there would be damaging shaking in the Raton Basin, where two magnitude 4 or larger quakes took place in 2016.

In north Texas and north Arkansas, however, where the researchers expected damaging induced earthquakes, there were no earthquakes in 2016 larger than magnitude 2.7. Petersen said the USGS team will be working with researchers in north Texas to find out whether there were any changes in injection practices in the area in the past year.

Petersen said the 2016 hazard forecast has been used by risk modelers, the U.S Army Corps of Engineers, and state geological surveys and city and county emergency managers, among others.

The one-year forecasts may become less relevant if induced earthquake rates continue to fall as the result of wastewater injection regulations, Petersen said. “But as long as the earthquake rates in the central and eastern U.S. remain elevated and cause a significant chance for damaging ground shaking, it will be important to make these types of forecasts. Continuing collaborations between regulators, industry, and scientists will be important in reducing hazard, improving forecasts, and enhancing preparedness.” 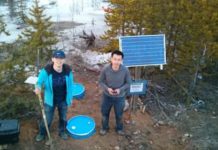 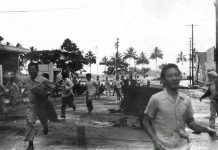