Using seismic data and supercomputers, Rice University geophysicists have conducted a massive seismic CT scan of the upper mantle beneath the Tibetan Plateau and concluded that the southern half of the “Roof of the World” formed in less than one-quarter of the time since the beginning of India-Eurasia continental collision.

The research, which appears online this week in the journal Nature Communications, finds that the high-elevation of Southern Tibet was largely achieved within 10 million years. Continental India’s tectonic collision with Asia began about 45 million years ago.

“The features that we see in our tomographic image are very different from what has been seen before using traditional seismic inversion techniques,” said Min Chen, the Rice research scientist who headed the project. “Because we used full waveform inversion to assimilate a large seismic data set, we were able to see more clearly how the upper-mantle lithosphere beneath Southern Tibet differs from that of the surrounding region. Our seismic image suggests that the Tibetan lithosphere thickened and formed a denser root that broke away and sank deeper into the mantle. We conclude that most of the uplift across Southern Tibet likely occurred when this lithospheric root broke away.”

The research could help answer longstanding questions about Tibet’s formation. Known as the “Roof of the World,” the Tibetan Plateau stands more than three miles above sea level. The basic story behind its creation — the tectonic collision between the Indian and Eurasian continents — is well-known to schoolchildren the world over, but the specific details have remained elusive. For example, what causes the plateau to rise and how does its high elevation impact Earth’s climate?

“The leading theory holds that the plateau rose continuously once the India-Eurasia continental collision began, and that the plateau is maintained by the northward motion of the Indian plate, which forces the plateau to shorten horizontally and move upward simultaneously,” said study co-author Fenglin Niu, a professor of Earth science at Rice. “Our findings support a different scenario, a more rapid and pulsed uplift of Southern Tibet.”

It took three years for Chen and colleagues to complete their tomographic model of the crust and upper-mantle structure beneath Tibet. The model is based on readings from thousands of seismic stations in China, Japan and other countries in East Asia. Seismometers record the arrival time and amplitude of seismic waves, pulses of energy that are released by earthquakes and that travel through Earth. The arrival time of a seismic wave at a particular seismometer depends upon what type of rock it has passed through. Working backward from instrument readings to calculate the factors that produced them is something scientists refer to as an inverse problem, and seismological inverse problems with full waveforms incorporating all kinds of usable seismic waves are some of the most complex inverse problems to solve.

“The technique really allows us to use all the wiggles on a large number of seismographs to build up a more realistic 3-D model of Earth’s interior, in much the same way that whales or bats use echo-location,” she said. “The seismic stations are like the ears of the animal, but the echo that they are hearing is a seismic wave that has either been transmitted through or bounced off of subsurface features inside Earth.”

The tomographic model includes features to a depth of about 500 miles below Tibet and the Himalaya Mountains. The model was computed on Rice’s DAVinCI computing cluster and on supercomputers at the University of Texas that are part of the National Science Foundation’s Extreme Science and Engineering Discovery Environment (XSEDE).

“The mechanism that led to the rise of Southern Tibet is called lithospheric thickening and foundering,” Chen said. “This happened because of convergence of two continental plates, which are each buoyant and not easy to subduct underneath the other plate. One of the plates, in this case on the Tibetan side, was more deformable than the other, and it began to deform around 45 million years ago when the collision began. The crust and the rigid lid of upper mantle — the lithosphere — deformed and thickened, and the denser lower part of this thickened lithosphere eventually foundered, or broke off from the rest of the lithosphere. Today, in our model, we can see a T-shaped section of this foundered lithosphere that extends from a depth of about 250 kilometers to at least 660 kilometers.”

Chen said that after the denser lithospheric root broke away, the remaining lithosphere under Southern Tibet experienced rapid uplift in response.

“The T-shaped piece of foundered lithosphere sank deeper into the mantle and also induced hot upwelling of the asthenosphere, which leads to surface magmatism in Southern Tibet,” she said.

Such magmatism is documented in the rock record of the region, beginning around 30 million years ago in an epoch known as the Oligocene.

“The spatial correlation between our tomographic model and Oligocene magmatism suggests that the Southern Tibetan uplift happened in a relatively short geological span that could have been as short as 5 million years,” Chen said. 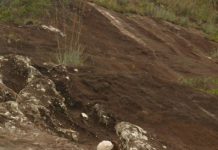 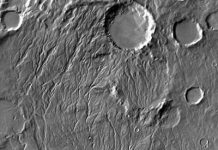 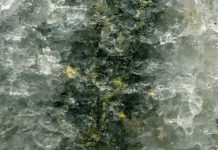