The mineral that makes up more than a third of our planet finally has a name, thanks to tiny samples found, ironically, in a meteorite that fell to Earth in Australia in 1879. Under the rules of the International Mineralogical Association, scientists can name a mineral (a solid material with a distinct chemical composition and crystalline structure) only once they’ve analyzed a natural sample.

But because the newly named mineral typically is stable only at pressures found more than 660 kilometers below Earth’s surface, natural versions of the mineral remained stubbornly out of reach. So scientists looked for another source of incredibly high pressures: collisions between asteroids in space, such as the one that created the Australian meteorite hundreds of millions of years ago.

Analyzing a slice of the meteorite (see image above), researchers discovered that the crash briefly subjected the rock to hellish temperatures of about 2100°C and pressures about 240,000 times sea-level air pressure, they report online today in Science. In dark veins within the once-shattered sample, the researchers also found tiny 20- to 30-micrometer-wide blobs of the mineral. The frigid cold of space locked the mineral’s atoms in place, and slightly elevated pressures due to stresses inside the meteorite also helped preserve its crystalline structure.

The mineral’s new name, bridgmanite, honors 1946 Nobel Prize winner Percy Bridgman, a physicist who pioneered the analyses of minerals and other materials under high pressure. Previous estimates suggest that 70% of Earth’s lower mantle—which falls between depths of 660 and 2900 kilometers—is bridgmanite, the researchers say. That means the new mineral accounts for a whopping 38% of Earth’s entire volume.

Note : The above story is based on materials provided by American Association for the Advancement of Science . The original article was written by Sid Perkins . 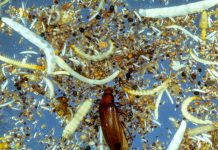