The unusual river dolphins, some of them known for their poor eyesight and side-swimming behavior are all descendants of ocean-dwelling species. Until now, however, there has been no consensus about their relationships, and few specimens to help illuminate them. In the new issue of the Journal of Vertebrate Paleontology, researchers describe a new fossil dolphin species from the Miocene (dating to more than 16 mya) of the Pisco Basin, a desert on the coast of Peru. It belongs to a rare extinct family of marine dolphins, the squalodelphinids, which are related to the endangered Ganges and Indus river dolphins living today. The new specimens increase the known diversity of squalodelphinids and help shed light on their relationships.

River dolphins are a bizarre group of cetaceans (marine mammals) in that they reside in freshwater rivers and estuaries, though their ancestors were marine. As a result of life in muddy river water, some are functionally blind and have very small dorsal fins. Despite similar appearances, the South Asian river dolphins of the Ganges and Indus rivers (Platanista spp.) are only distantly related to other river dolphins of the Amazon and Yangtze rivers.

The new species, named Huaridelphis raimondii, after the Huari culture (500-1000 AD) the smallest species of its family yet known, has been described from several well-preserved fossils. “The quality of the fossils places these specimens as some of the best-preserved members of this rare family,” says Olivier Lambert, of the Institut Royal des Sciences Naturelles de Belgique, lead author of the study.

Though the squalodelphinids have been known for some time, these small to medium size dolphins are rare in the fossil record, and were until now only found in a few localities (Argentina, France, Italy, and east coast of U.S.A.).

The Pisco Basin, is currently one of the richest areas in the world for the study of the evolution of whales and other marine mammals; whales with fossilized baleen, a giant raptorial sperm whale, and a walrus-like dolphin have been discovered there. According to Dr. Lambert, “For the past 30 years, many fossil cetacean species were described based on material from the Pisco Basin, dated from the Eocene to the Pliocene. And we are still far from the end of the study for this hot spot of marine mammal paleontology.”

Recent fieldwork by the Peruvian paleontologist Mario Urbina and his team in new localities from the early Miocene (23-16 million years ago) lead to the discovery of several well-preserved squalodelphinid skulls, now curated at the Museo de Historia Natural (Lima). Their analysis by Lambert and colleagues lead to the description of the new species.

“Considering the richness of the fossil localities recently discovered, other new extinct dolphins from the same geological age will certainly soon be found and studied,” added Giovanni Bianucci, of the Universitá degli Studi di Pisa and an author on the study. 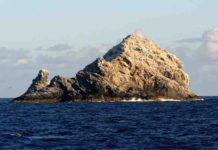 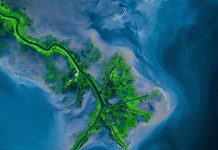