They’re called the Alberta oilsands but most of the sand actually came from the Appalachian region on the eastern side of the North American continent, a new University of Calgary-led study shows.

This study is the first to determine the age of individual sediment grains in the oilsands and assess their origin.

“The oilsands are looked at as a Western asset,” says study lead author Christine Benyon, who is just completing her Master’s degree in Geoscience in the Faculty of Science.
“But we wouldn’t have oilsands without the sand, and some of that sand owes its origin to the Appalachians and other parts of Canada.”
The research, which also involved study sponsor Nexen Energy ULC and the University of Arizona LaserChron Center, was published last week in the Journal of Sedimentary Research.
The findings contribute to geologists’ fundamental understanding of the oilsands.
They also help oilsands companies better understand the stratigraphy, or layers, of sand and the ancient valleys where sediment was deposited, “and that could lead to better production techniques,” Benyon says.
To determine the origin of the sand, the researchers used a relatively new technique called “detrital zircon uranium-lead geochronology.”
They used a mass spectrometer to date the age of tiny and extremely durable crystallized minerals called zircons that are present in the oilsands.
“The age of those zircons tells us how long since they crystallized. And knowing that, we can infer their place of origin,” Benyon explains.
Researchers dated the zircons in nine core samples from three wells drilled into the oilsands’ McMurray Formation.
Lowermost deposits contained zircons ranging from 1,800 to 2,800 million years old. These zircons, and thereby the associated sand, originally came from the Canadian Shield, which contains rocks of those ages, Benyon says.
Most of the oilsands’ sediment contains zircons that range from 300 to 1,200 million years old — the same zircon signature found in Appalachian sources in eastern North America.
The uppermost oilsands contain zircons that are less than 250 million years old, indicating the Canadian Rockies as their most likely place of origin.
So how did so much of the sand, deposited during the Cretaceous geological time period about 145 to 66 million years ago (before the sand was emplaced with oil), get to Alberta from the other side of the continent?
No one knows for sure, but Benyon and her co-authors propose three theories, all involving sediment transported by a continental-sized river system:
Recommended For You  Sleeping sands of the Kalahari awaken after more than 10,000 years
No matter how and when the sand got to the present location of the oilsands, “the study tells us that the Appalachians were an important source of sediment in the geological history of North America,” Benyon says.
Note : The above story is based on materials provided by University of Calgary. 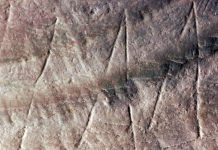