Home Geology Waiting for Death Valley’s Big Bang
Share on Facebook
Tweet on Twitter
In California’s Death Valley, death is looking just a bit closer. Geologists have determined that the half-mile-wide Ubehebe Crater, formed by a prehistoric volcanic explosion, was created far more recently than previously thought — and that conditions for a sequel may exist today.

Up to now, geologists were vague on the age of the 600-foot deep crater, which formed when a rising plume of magma hit a pocket of underground water, creating an explosion. The most common estimate was about 6,000 years, based partly on Native American artifacts found under debris. Now, a team based at Columbia University’s Lamont-Doherty Earth Observatory has used isotopes in rocks blown out of the crater to show that it formed just 800 years ago, around the year 1200. That geologic youth means it probably still has some vigor; moreover, the scientists think there is still enough groundwater and magma around for another eventual reaction. The study appears in the current issue of the journal Geophysical Research Letters.

Ubehebe (YOU-bee-HEE-bee) is the largest of a dozen such craters, or maars, clustered over about 3 square kilometers of Death Valley National Park. The violent mixing of magma and water, resulting in a so-called phreatomagmatic explosion, blew a hole in the overlying sedimentary rock, sending out superheated steam, volcanic ash and deadly gases such as sulfur dioxide. Study coauthor Brent Goehring, (now at Purdue University) says this would have created an atom-bomb-like mushroom cloud that collapsed on itself in a donut shape, then rushed outward along the ground at some 200 miles an hour, while rocks hailed down. Any creature within two miles or more would be fatally thrown, suffocated, burned and bombarded, though not necessarily in that order.
“It would be fun to witness — but I’d want to be 10 miles away,” said Goehring of the explosion.
The team began its work after Goehring and Lamont-Doherty professor Nicholas Christie-Blick led students on a field trip to Death Valley. Noting that Ubehebe remained poorly studied, they got permission from the park to gather some 3- to 6-inch fragments of sandstone and quartzite, part of the sedimentary conglomerate rock that the explosion had torn out. In the lab, Goehring and Lamont-Doherty geochemist Joerg Schaefer applied recent advances in the analysis of beryllium isotopes, which change their weight when exposed to cosmic rays.
The isotopes change at a predictable rate when exposed to the rays, so they could pinpoint when the stones were unearthed. An intern at Lamont-Doherty, Columbia College undergraduate Peri Sasnett, took a leading role in the analysis, and ended up as first author on the paper.
The dates clustered from 2,100 to 800 years ago; the scientists interpreted this as signaling a series of smaller explosions, culminating in the big one that created the main crater around 1200. A few other dates went back 3,000 to 5,000 years; these are thought to have come from earlier explosions at smaller nearby maars. Christie-Blick said the dates make it likely that magma is still lurking somewhere below. He pointed out that recent geophysical studies by other researchers have spotted what look like magma bodies under other parts of Death Valley.
“Additional small bodies may exist in the region, even if they are sufficiently small not to show up geophysically,” he said. He added that the dates give a rough idea of eruption frequency: about every thousand years or less, which puts the current day within the realm of possibility. “There is no basis for thinking that Ubehebe is done,” he said.
Hydrological data points the same way. Phreatomagmatic explosions are thought to take place mainly in wet places, which would seem to exclude Death Valley–the hottest, driest place on the continent. Yet, as the researchers point out, Lamont-Doherty tree-ring researchers have already shown that the region was even hotter and drier during Medieval times, when the blowup took place.
If there was sufficient water then, there is certainly enough now, they say. Observations of springs and modeling of groundwater levels suggests the modern water table starts about 500 feet below the crater floor.
The researchers’ calculations suggest that it would take a spherical magma chamber as small as 300 feet across and an even smaller pocket of water to produce a Ubehebe-size incident.
Park officials are taking the study in stride. “We’ve typically viewed Ubehebe as a static feature, but of course we’re aware it could come back,” said geologist Stephanie Kyriazis, a park education specialist.
“This certainly adds another dimension to what we tell the public.” (About a million people visit the park each year.) The scientists note that any reactivation of the crater would almost certainly be presaged by warning signs such as shallow earthquakes and opening of steam vents; this could go on for years before anything bigger happened.
For perspective, Yellowstone National Park, further east, is loaded with explosion craters made by related processes, plus the world’s largest concentration of volcanically driven hot springs, geysers and fumaroles.
The U.S. Geological Survey expects an explosion big enough to create a 300-foot-wide crater in Yellowstone about every 200 years; there have already been at least 20 smaller blowouts in the past 130 years.
Visitors sometimes are boiled alive in springs, but no one has yet been blown up. Death Valley’s own fatal dangers are mainly non-geological: single-vehicle car accidents, heat exhaustion and flash floods. Rock falls, rattlesnakes and scorpions provide extra hazards, said Kyriazis. The crater is not currently on the list. “Right now, we’re not planning to issue an orange alert or anything like that,” she said.
Note : The above story is reprinted from materials provided by The Earth Institute at Columbia University. 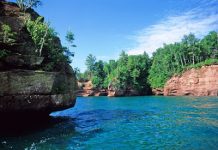 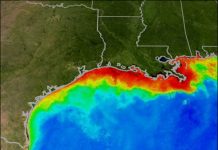