Igneous rock, or magmatic rock, is one of the three main rock types, the others being sedimentary and metamorphic. Igneous rock is formed through the cooling and solidification of magma or lava. The magma can be derived from partial melts of existing rocks in either a planet’s mantle or crust. Typically, the melting is caused by one or more of three processes: an increase in temperature, a decrease in pressure, or a change in composition. Solidification into rock occurs either below the surface as intrusive rocks or on the surface as extrusive rocks. Igneous rock may form with crystallization to form granular, crystalline rocks, or without crystallization to form natural glasses. Igneous rocks occur in a wide range of geological settings: shields, platforms, orogens, basins, large igneous provinces, extended crust and oceanic crust.

Minerals that in igneous rocks

By the cooling down of magma, atoms are linked into crystalline patterns and subsequently different minerals are formed. When the formation takes place in the depths of the earth’s crust (approx. 33km deep) quite large rocks may be formed (for instance, granites).

Igneous rocks are formed and created by magmatic processes in the earth. To form very large crystals of rare minerals, exceptional conditions are needed. For instance, a rock called pegmatite is formed by the crystallization of magma enriched with water in the veins of other rocks, and may contain beryl, tourmaline and topaz.

Igneous rocks are divided into two types — volcanic rock (extrusive) and plutonic rock (intrusive) — depending on where the magma cools.
Volcanic or extrusive rock

This is rock that is formed on the surface of the earth. In contact with air or seawater, molten rock cools rapidly and either quenches to a glass (like obsidian) or forms small crystals (basalt). Volcanic rocks are usually finely grained or glassy in structure.

Basalt is an extrusive rock, finely grained due to its rapid cooling. It largely consists of tiny feldspar and pyroxene crystals (like diopside and enstatite). Some basalts contain gemstones like corundum, zircon and garnets.

Another volcanic rock is called kimberlite. Kimberlite pipes are the most major source of diamond.

Occasionally, varieties of volcanic glass, obsidian, are cut and fashioned as gemstones. Obsidian is an amorphous mineraloid with the hardness of approximately 5.5. Varieties of obsidian include:

When molten rock solidifies within preexisting rock, it cools slowly, forming plutonic rocks with larger crystals. They tend to be coarse grained.

Granite is a coarse grained intrusive rock which contains the minerals quartz and feldspar, and usually carries mica or hornblende. In some circumstances, granite undergoes “fractional crystallization”, a process where slow cooling creates crystals of different minerals as they form at different temperatures.

Minerals of the pegmatite group are among the last to be formed, often occuring as veins penetrating their surroundings.

Associated minerals that find their origin in igneous rocks:

Stages of the igneous or magmatic cycle

The stages of the igneous or magmatic cycle are as follows:

Recommended For You  Clay mineral waters Earth's mantle from the inside

3. Pegmatite phase (rest crystallization) 700-400 degrees C:
The residual part of the magma, which is rich in fluxes, is known as the pegmatite stage. The melt becomes a watery solution as solidification proceeds. Because of this fluidity, the liquids can penetrate fissures and cracks in the surrounding rocks. Under the concentrated pressure and temperatures, individual crystals form that can measure several centimeters, and occasionally several meters! The prismatic crystals grow perpendicular to the walls of the vein. Pegmatite veins are some of the best examples of gemstone formation.

4. Pneumatolytic phase 500-300 degrees C:
Minerals formed in this phase form at lower temperatures and rising pressure. Superheated volatile components are involved. The most prominent of these components is water vapor, boron and fluorine gases. Under the influence of these vapors, other minerals are often formed in the contact zone of limestone.

5. Hydrothermal phase 400-50 degrees C:
This is a process associated with igneous activity that involves heated or super-heated water. Water at very high temperature and pressure is an exceedingly active substance, capable of breaking down silicates and dissolving many substances normally thought to be insoluble. This is the last stage of minerals that can be considered to be formed directly from magma.

Zircon to calculate the age of the earth

Zircon forms in granites deep in the earth’s crust (plutonic rock). Through movement of tectonic plates, this granite is brought to the surface and starts mountain building. Through erosion, the granite (and the contained zircon) builds sediments which will eventually be buried deep enough to transform into metamorphic rocks.

Due to its hardness of 7.5 on the scale of Mohs, the zircons usually survive the sedimentary process intact. Because of its resistance to chemical attacks, zircon will survive the contact metamorphism process which is trying to attack it with heat and pressure. The latter is important as the liquid mass surrounding the zircon will cause a new rim to be formed around the old zircon, just like the formation of tree rings. This first cycle usually will take hundreds of million years.

The old crystal with its newly formed rim is then pushed up again through tectonic plate interactions, then this geologic cycle repeats itself.

A third and well known property of zircon is that it can accommodate radioactive elements like uranium. Uranium has the ability to decay into lead at a fixed time rate. Calculation of the uranium-lead ratio may give a clue of the age of the zircon (and thus Earth’s age). However, lead may leak from the zircon, disturbing the uranium-lead ratio.

Fortunately, scientists found a new way of calculation by using isotopes. The uranium-238 isotope (with a half-life of 4.468 billion years) decays to lead-206, while uranium-235 (with a half-life of 703.8 million years) decays to lead-207. The “secondary ion mass spectrometry” (or SIMS) technique is used for this kind of measurement. By measuring both ‘parent-daughter’ decays of both these processes, an accurate age of the zircon can be calculated — that is, if both measurements are consistent (which is not always the case).

The Isua rocks on Greenland are a source for this way of dating the earth’s age. Current calculations indicate Earth is 4.6 billion years old. 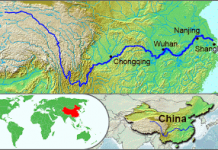 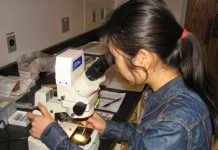 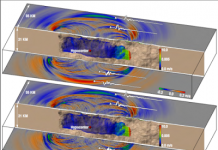