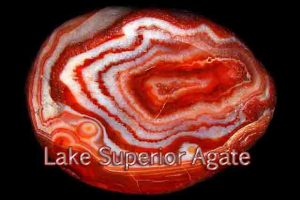 What is Lake Superior agate?

The Lake Superior agate is noted for its rich red, orange, and yellow coloring. This color scheme is caused by the oxidation of iron. Iron leached from rocks provided the pigment that gives the gemstone its beautiful array of color. The concentration of iron and the amount of oxidation determine the color within or between an agate’s bands. There can also be white, grey, black and tan strips of color as well.

The gemstone comes in various sizes. The gas pockets in which the agates formed were primarily small, about 1 cm in diameter. A few Lake Superior agates have been found that are 22 cm in diameter with a mass exceeding 10 kilograms. Very large agates are extremely rare.

The most common type of Lake Superior agate is the fortification agate with its eye-catching banding patterns. Each band, when traced around an exposed pattern or “face,” connects with itself like the walls of a fort, hence the name fortification agate.

A common subtype of the fortification agate is the parallel-banded, onyx-fortification or water-level agate. Perfectly straight, parallel bands occur over all or part of these stones. The straight bands were produced by puddles of quartz-rich solutions that crystallized inside the gas pocket under very low fluid pressure. The parallel nature of the bands also indicates the agate’s position inside the lava flow.

Probably the most popular Lake Superior agate is also one of the rarest. The highly treasured eye agate has perfectly round bands or “eyes” dotting the surface of the stone.

More than a billion years ago, the North American continent began to split apart along plate boundaries. Magma upwelled into iron-rich lava flows throughout the Midcontinent Rift System, including what is now the Minnesota Iron Range region. These flows are now exposed along the north and south shores of Lake Superior. The tectonic forces that attempted to pull the continent apart, and which left behind the lava flows, also created the Superior trough, a depressed region that became the basin of Lake Superior.

Recommended For You  Moldavite : What is Moldavite Gemstones? How Moldavite is Formed?

Over the next billion years, erosion exposed a number of the quartz-filled, banded vesicles—agates—were freed by running water and chemical disintegration of the lavas, since these vesicles were now harder than the lava rocks that contained them. The vast majority, however, remained lodged in the lava flows until the next major geologic event that changed them and Minnesota.

During the ensuing ice ages a lobe of glacial ice, the Superior lobe, moved into Minnesota through the agate-filled Superior trough. The glacier picked up surface agates and transported them south. Its crushing action and cycle of freezing and thawing at its base also freed many agates from within the lava flows and transported them, too. The advancing glacier acted like an enormous rock tumbler, abrading, fracturing, and rough-polishing the agates.

Where to find Lake Superior agates?

The Superior lobe spread agates and other debris throughout northeastern and central Minnesota and extreme northwestern Wisconsin.

Glaciers dispersed Minnesota’s official rock around the state into various settings where hikers, campers, hunters, and outdoor enthusiasts can readily collect them. Many beautiful specimens have been found in gravel banks along rivers and streams.

Popular hunting grounds include the Mississippi River and waters that empty into Lake Superior along the North Shore. The beaches along Lake Superior and hundreds of other lakes have produced many gems. Virtually any place with exposed gravel and rocks offers the chance of finding Lake Superior agates.

How to identify Lake Superior agate?

The following characteristics will help you identify agates in the field. 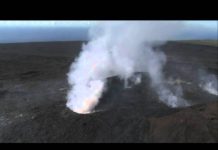 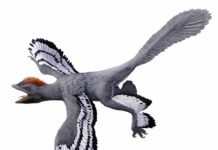 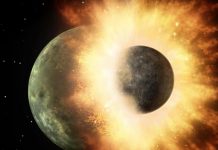