An international team of scientists led by The University of Manchester has used state-of-the-art X-ray methods to analyse the chemistry of feathers of birds, in order to discover the true colours of extinct ancient animals such as dinosaurs.

Melanin is the dominant pigment in mammals and birds that gives them either a black/dark brown colour, for example in ravens, or a reddish/yellow hue, as in foxes. The black pigment is called eumelanin, while the reddish type is pheomelanin.

Pioneering research at The University’s Interdisciplinary Centre for Ancient Life has studied the feathers of modern birds in order to find long-lived chemical markers for these different pigments, so that traces may be reconstructed in fossil specimens.

In collaboration with the UK’s Diamond Light Source x-ray laboratories and Stanford University in the USA, the scientists analysed feathers shed by birds housed in animal sanctuaries. Their research has been able to show that the trace metal zinc, when it is bonded to sulphur compounds in a specific way, is a reliable and sensitive indicator for the presence of pheomelanin within the distinct feathers of birds of prey.

This remarkable discovery means that scientists may perhaps now be able to go beyond monochrome depictions of extinct creatures, and make the first steps towards portraying colours based upon chemical evidence.

“A fundamental rule in geology is that the present is the key to the past” said Roy Wogelius, Professor of Geochemistry at The University of Manchester and senior author of the study. “This work on modern animals now provides another chemical ‘key’ for helping us to accurately reconstruct the appearance of long extinct animals”.

Recommended For You  Fossil shark turns into mystery pterosaur

“Melanin is a very important component in biology, but its exact chemistry is still not precisely known, especially as to how metals such as calcium, copper and zinc interact with it” said Nick Edwards, a Post Doctoral Research Associate at the University of Manchester and the lead author of the study. “Here we have used a new approach to probe these components of melanin and have found that there are subtle but measurable differences between the different types of melanin with regards to certain elements”.

“The avian descendants of dinosaurs have kept the chemical key to unlocking colour precisely locked in their feather chemistry!” added Professor Phil Manning, co-author of the study.

The article ‘Elemental characterisation of melanin in feathers via synchrotron X-ray imaging and absorption spectroscopy’ will appear in September’s Scientific Reports journal. 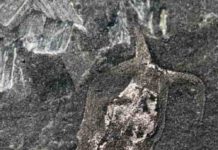 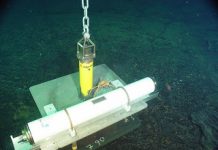 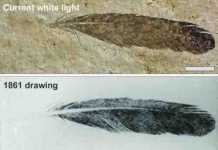 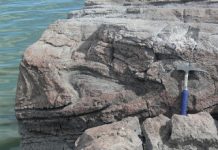