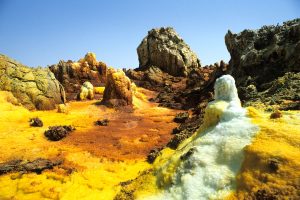 Dallol is a volcanic explosion crater (or maar) in the Danakil Depression, northeast of the Erta Ale Range in Ethiopia. It has been formed by the intrusion of basaltic magma in Miocene salt deposits and subsequent hydrothermal activity. Phreatic eruptions took place here in 1926, forming Dallol Volcano, numerous other eruption craters dot the salt flats nearby. These craters are the lowest known subaerial volcanic vents in the world, at over 45 m (150 ft) below sea level. The most recent major activity was in October 2004 when the shallow magma chamber beneath Dallol deflated and fed a magma intrusion southwards beneath the rift.

Dallol is nested on top of an at least 1000m thick layer of quaternary evaporates including large potash (potassium salt) reserves, the source of which will be discussed in more detail below.  Dallol mountain is thought to have been formed as the result of intrusion of a basaltic magma body underneath. The circular depression near the center of Dallol mountain is presumably a collapse crater, although neither its age nor the exact process from which it resulted are known. The SW flank of Dallol mountain harbours impressive salt canyons formed by erosion processes.

The 1926 phreatic eruption formed a 30m wide crater and was the last significant event at Dallol.  Currently, activity is in the form of hot brine springs.  Salts washed out of the underlying layers are transported to the surface by geothermally heated water and rapidly crystallize as the water evaporates.  The characteristic white, yellow and red colours are the result of sulphur and potassium salts coloured by various ions. The terminology Dallol is often used to define an even larger area, which may cause confusion as to the location of mining operations in the area.

Recommended For You  Drones collect measurements from a volcanic plume at Volcán de Fuego, Guatemala
Dallol Volcano
1 of 10 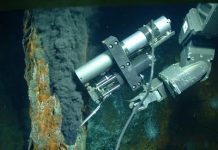 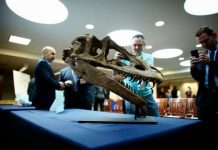 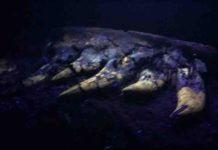