Last Thursday, thousands of people from southern New Jersey to Long Island and coastal Connecticut felt the earth tremble. Between 1:20 pm and 2:40 pm, dishes, desks and buildings shook for up to 20 seconds—in some locations, several times. With everyone thinking earthquake, Twitter and Facebook lit up; news reporters scrambled; calls poured into police, the U.S. Geological Survey, and Columbia University’s Lamont-Doherty Earth Observatory, which maintains the region’s network of 50-some seismographic stations.

The U.S. Northeast sees dozens of quakes each year, most too small to feel. One of the biggest, a 2011 magnitude 5.8 tremor in Virginia, cracked scattered buildings including the Washington Monument—but even that was minor compared to historic quakes in California and elsewhere. The most recent was on Jan. 16, 2016, near Martinsburg, West Virginia, felt some 28 miles from its epicenter, but harmless. Given the breadth of reports, Thursday’s event initially looked big.

But seismometers registered no obvious ground movement. Won-Young Kim, head of the seismic network, quickly concluded that the source was not nature, but man. “In this region, when a lot of people report shaking, and there’s no comparable signal in the ground, you suspect a sonic boom,” he said. Specifically, a military jet breaking the sound barrier. The USGS quickly concurred, saying it had registered at least nine sonic booms. A little after 4 p.m., the U.S. Navy fessed up: Two fighter jets, a stealth F-35C and an F-18, had been conducting what it described as “routine” supersonic test flights off the coast. The media and emergency responders signed off on the story, and went back to whatever else they were doing.

Recommended For You  Machine-learning earthquake prediction in lab shows promise

Sonic booms are shock waves created as an aircraft surpasses the speed of sound, about 767 miles per hour. Supersonic military aircraft fly almost daily over the ocean, but booms rarely reach land, because shock waves generally travel downward in a narrow path. However, waves may spread much farther in certain cold-weather conditions. One explanation: When earth’s surface is cold, a layer of warmer air may build around the altitude that jets fly, and this layer deflects waves far to the side. Prevailing winter winds could also help push shock waves toward land. The waves deliver sound, and a burst of air pressure. People may hear a rumble or crack, but often the frequencies are in the very low-frequency infrasound range, below the perception of the human ear. In any case, if the waves are strong enough, they can cause earthquake-like shaking on the surface.

The East Coast boom issue dates to at least the winter of 1977-78, when similar shock waves hit many communities. The military denied responsibility, so rumors and speculations abounded: secret weapons tests; operations of spacecraft or submarines; giant methane bubbles erupting from the seafloor. Lamont seismologists hypothesized that small earthquakes were emanating from areas lacking adequate instrumentation; or oil companies might be igniting explosives offshore to explore for petroleum reserves. David Simpson, then Lamont’s head of seismology, set out an array of portable seismometers near Cape May, N.J., where many complaints came from, but got little useful information. “This was a big mystery that lasted for months,” said Lamont seismologist emeritus John Armbruster. “It shows the frustrations of dealing with a culture of military secrecy.”

Members of Congress, alarmed about the repeated episodes, demanded an investigation from then president Jimmy Carter, and Carter turned it over to the Office of Naval Research. Carter’s science advisor was a Lamont alumnus: the influential seismologist and oceanographer Frank Press. Press might have had something to do with the eventual resolution. In any case, after months of research, the government finally issued a report admitting that its own jets were to blame.

That has not stopped people from being scared by the booms; earthquake alarms linked to them are still a regular event (though the extent of the more recent ones may be due as much to the ubiquity and instantaneous nature of social media as to the weather or the actual number of flights). From Maryland to New Jersey, a series of booms sparked concern along the coast in October 2012, and again in February 2014. Two days before the most recent event, residents of Charleston, S.C., were also frightened by tremors. At least in these events, the military has been quick to step up and take responsibility.

Because the shock waves travel through the air, not the ground, conventional seismic instruments don’t generally pick them up—that is, unless they strike hard enough to cause buildings or ground to shake. Even then, the motion might not be picked up unless there happens to be an instrument close by, because compared to a real earthquake, the effects are relatively weak and local.

That said, the latest booms were relatively powerful. Kim says he measured eight. A conventional seismometer near the southern New Jersey town of Hammonton registered a series of ground vibrations. The Lamont lab is still analyzing data, but other seismometers in New Jersey and Long Island may also have picked up ground motion.

A new set of seismic stations installed since 2013 also have air-pressure sensors, and detectors for infrasound,  which can clearly detect sonic booms (along with hopefully less common events such as nuclear bomb tests or large meteors streaking through the air). At Hammonton and at least five other stations in New Jersey and Connecticut, infrasound detectors picked up acoustic waves. An air-pressure sensor at Hammonton also jumped at the same time. “Some things, we don’t hear, but they still have energy,” said Kim.

Note: The above post is reprinted from materials provided by Earth Institute, Columbia University. The original article was written by Kevin Krajick. 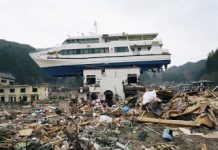 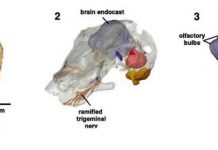 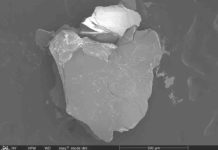