Existing GPS instruments at monitoring stations worldwide could be used to increase the speed and accuracy of tsunami warnings, according to new study accepted for publication in Geophysical Research Letters, a journal of the American Geophysical Union. Real-time Global Positioning System (GPS) measurements can be used to show how major earthquakes displace the ocean floor, cutting tsunami warning times by nearly 20 minutes and potentially reducing harm to coastal communities, according to the study’s authors.

Tsunamis that originate from earthquakes near the shore are relatively rare. But these tsunamis are especially dangerous because they can arrive at the coastline within minutes. For coastal communities, quick and accurate warnings are essential for saving as many lives as possible, according to previous research.

The new study finds that real-time GPS data gathered at hundreds of geophysical monitoring stations around the world can be used to estimate how an earthquake deforms the sea floor. Warning agencies can use that information to determine the resulting tsunami strength for vulnerable coastal areas within two to three minutes. Earlier warnings for coastal communities could potentially save lives, said the study’s authors.

“This isn’t a deployment of new instruments, just a change in thinking and using these instruments,” said Diego Melgar, a research scientist at Berkeley Seismological Laboratory in Berkeley, California, and lead author of the new study. “Our results show that with what people have now, at geophysical monitoring agencies everywhere in the world, people can do this.”

Current tsunami warning systems use seismometers, instruments that measure how the earth shakes during an earthquake, to pinpoint the epicenter, magnitude, and depth of an earthquake. Since the strength of a tsunami is not always directly related to the magnitude of the quake producing it, the additional information that real-time GPS data can quickly and accurately provide on the earthquake’s source is important.

As an earthquake increases in size, above 7.5 to 8 MW, its recorded magnitude becomes less reliable: seismometers closest to high-magnitude quakes often inaccurately record their size. Generating an accurate tsunami warning requires that warning agencies wait for the earthquake’s energy waves to reach earthquake monitoring stations farther away to generate an accurate model of the earthquake and resulting tsunami: a delay of up to 20 to 30 minutes after the first record of the earthquake, Melgar said.

The tsunami warnings generated after the Tohuku, Japan, earthquake in 2011 were generated using this method. The resulting tsunami, infamous for causing the Fukushima power plant meltdown, caused more than 15,000 deaths. Although the Japanese Meteorological Agency issued a tsunami warning three minutes after the quake, their initial estimate of the quake’s magnitude at 7.9 was too low and the tsunami warning it generated was too conservative. The quake was actually 30 times stronger with a magnitude of 9.0, according to previous research. Tsunami wave heights reached up to 128 feet (30 meters) above sea level, and swept inland as far as 6 miles (10 kilometers) in some areas.

Seismic monitoring stations around the world already use GPS to precisely monitor tectonic plate movements and determine how earthquakes change the landscape. The new study suggests existing GPS instruments can also be used to more quickly and accurately predict the size of an incoming tsunami.

During an earthquake, coastal GPS stations can collect real-time information about how the land they sit on deforms. This information can then be plugged into a numerical model to estimate the displacement of the ocean floor and create an accurate prediction of the potential tsunami threat and scale within minutes, according to the new research.

To determine the accuracy of these GPS warnings, the researchers examined four recent tsunami-generating earthquakes. They examined records of the earthquake source, tsunami propagation, and tsunami inundation for each event. The researchers found that their system could generate more accurate tsunami warnings faster than existing warning systems.

Using this system, tsunami warning maps could be generated within one to two minutes after the beginning of the earthquake.

Information about the estimated height of tsunami waves took less than two additional minutes of time to compute.

NOAA is in the process of incorporating this real-time GPS data into their existing tsunami and earthquake warning system, according to Barry Hirshorn, a senior geophysicist at NOAA’s Pacific Tsunami Warning Center (PTWC) at the Inouye Regional Center (IRC), on Ford Island, Hawaii, who was not involved in the new study.

Recommended For You  New technology developed to improve forecasting of Earthquakes, Tsunamis

The goal is to create a local tsunami warning system incorporating this technology for the entire West Coast of the U.S., Melgar said.

Hirshorn said the new paper provides a template for how to incorporate GPS data into tsunami operations. “We’ll be able to issue faster and more accurate tsunami warnings – and have a better idea of the true magnitude of M8 plus earthquakes much more rapidly – in some cases even before the earthquake is over,” he said. 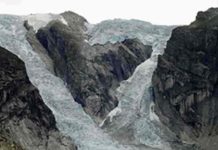 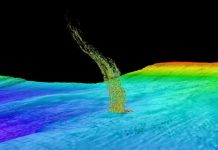