It’s Australia’s largest known meat-eating dinosaur but until now we’ve never seen how Australovenator moved – not even the man who dug it up and named it.

QUT is bringing five iconic Australian dinosaurs to full-sized life, including ‘Banjo’ the Australovenator and the giant herbivore Muttaburrasaurus, on The Cube, the world’s largest interactive learning display.

The team of Cube Studio game developers has partnered with the Queensland Museum’s renowned palaeontologist Dr Scott Hocknull to recreate the hyper-realistic, scientifically accurate prehistoric reptiles in a virtual environment.

Cube Studio manager Sean Druitt said all Dino Zoo animals were backed by the latest research and evidence on their textures, colouring, sounds, behaviours and movement. Even the environment and food sources in the zoo are scientifically accurate.

The Cube allows everyone to get as close to Jurassic Park as possible – without the danger of being eaten.

“It’s the first time ever these five Australian dinosaurs have been animated in 3D and given a realistic and scientifically defendable treatment.

“The Cube is a huge canvas, providing the perfect opportunity to recreate these dinosaurs in true scale and to give the public a real-world experience of these creatures.

Mr Druitt said, where there was scant information from fossil records, like skin colouring, his team had drawn inspiration from Dr Hocknull’s scientifically studied real-world analogues from creatures living today.

“The dinosaurs’ rich colour and texture might surprise you because it’s nothing like bland browns and greys from picture books – we’re re-educating the public about what they think they know about dinosaurs,’ Mr Druitt said.

“In the case of Banjo, which hunted in the Australian outback of the Late Cretaceous, the best match for living carnivores operating in a similar environment is a cross between a Cassowary, a Komodo Dragon and the African Wild Dog. Banjo’s markings are based on a combination of these three living species.”

Australovenator, is the most complete meat-eating dinosaur ever found in Australia, and is Australia’s answer to the Velociraptor – only three times the size, with 70 razor-sharp teeth and three enormous claws on each hand.

Dr Hocknull led the discovery of its 95 million-year-old bones near Winton in Queensland in 2006.

He also scientifically described and named the dinosaur Australovenator wintonensis (which means “Southern Hunter from Winton”) in 2009.

“Seeing Australovenator walking around for the first time was literally a childhood dream come true for me,” said Dr Hocknull.

“It’s been an incredible experience to discover, name, visualise it in 3D, and then control its movements via remote control within its digital universe.

“I’ve thoroughly enjoyed working with Sean and his team – it’s not every day you get to work with a crack team of developers on something you’ve wanted to do for years.

“This is a unique project because never before have game developers and a palaeontologist worked so closely side by side throughout the whole process to ensure the animals are as realistic as our knowledge allows.

“I’ve been providing information and feedback every step of the way, a luxury moviemakers and documentarians just don’t have the budgets for.

Dr Hocknull said he had learned as much about animation as he had taught the game developers about real-world dinosaurs.

“Seeing these animals fleshed out has very much informed my own research.

“Having that dino’s-eye view of its movement and its environment has given me insights I wouldn’t normally get just looking at the bones – it’s allowed me to form some new hypotheses about their biomechanical movements and behaviour of these dinosaurs that I’m now able to investigate as part of my ongoing research.”

Mr Druitt said the process of creating Dino Zoo had also been eye-opening for his team, who have had to rewrite the rules of animation in order to remain realistic.

“For example, a common trick we use in game development and animation is to over-exaggerate movement and actions to create drama and effect – like exaggerating the inward and outward movement of a rib cage to show that an animal is breathing,” he said.

“But in the real world we don’t see an elephant’s rib cage moving when it breathes normally, and neither would you see a dinosaur’s ribs moving with its breathing.

“We’ve had to strip back a lot of our creative liberties in order to remain true to accuracy.”

When the free installation at The Cube opens to the public in December, it will house 10 dinosaur species, separated into front and back paddocks by a virtual fence.

Each dinosaur will be equipped with artificial intelligence, allowing it to roam the paddocks at will, based on a set of pre-programmed behavioural parameters.

“You’ll see the dinosaurs doing something different every time you visit, rather than performing the same series of choreographed actions over and over,” Mr Druitt said.

“You can watch them and be awed by them just as you would a lion at a physical zoo, and it will be up to the dinosaurs what they want to do and when.

Dino Zoo will include additional digital activities including a dig pit simulator and an interactive Earth timeline. It will be backed by a series of STEM workshops for visiting high school students.

The public will get a sneak peak of Queensland’s very own Australovenator and Muttaburrasaurus on the run when Dr Hocknull presents a TEDx talk at QUT on September 5. Visit the TEDxQUT website for details. 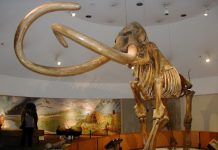 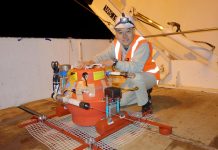 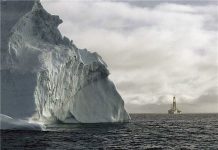