A new study of an otherworldly creature from half a billion years ago — a worm-like animal with legs, spikes and a head difficult to distinguish from its tail — has definitively identified its head for the first time, and revealed a previously unknown ring of teeth and a pair of simple eyes. The results, published today in the journal Nature, have helped scientists reconstruct what the common ancestor of everything from tiny roundworms to huge lobsters might have looked like.

Researchers from the University of Cambridge, the Royal Ontario Museum and the University of Toronto have found that the creature, known as Hallucigenia due to its strange appearance, had a throat lined with needle-like teeth, a previously unidentified feature which could help connect the dots between it, modern velvet worms and arthropods — the group which contains modern insects, spiders and crustaceans.

Arthropods, velvet worms (onychophorans) and water bears (tardigrades) all belong to the massive group of animals that moult, known as ecdysozoans. Though Hallucigenia is not the common ancestor of all ecdysozoans, it is a precursor to velvet worms. Finding this mouth arrangement in Hallucigenia helped scientists determine that velvet worms originally had the same configuration — but it was eventually lost through evolution.

“The early evolutionary history of this huge group is pretty much uncharted,” said Dr Martin Smith, a postdoctoral researcher in Cambridge’s Department of Earth Sciences, and the paper’s lead author. “While we know that the animals in this group are united by the fact that they moult, we haven’t been able to find many physical characteristics that unite them.”

“It turns out that the ancestors of moulting animals were much more anatomically advanced than we ever could have imagined: ring-like, plate-bearing worms with an armoured throat and a mouth surrounded by spines,” said Dr Jean-Bernard Caron, Curator of Invertebrate Palaeontology at the Royal Ontario Museum and Associate Professor in the Departments of Earth Sciences and Ecology & Evolutionary Biology at the University of Toronto. “We previously thought that neither velvet worms nor their ancestors had teeth. But Hallucigenia tells us that actually, velvet worm ancestors had them, and living forms just lost their teeth over time.”

Recommended For You  Dissecting the animal diet, past and present

Hallucigenia was just one of the weird creatures that lived during the Cambrian Explosion, a period of rapid evolutionary development starting about half a billion years ago, when most major animal groups first emerge in the fossil record.

At first, Hallucigenia threw palaeontologists for a bit of a loop. When it was identified in the 1970s, it was reconstructed both backwards and upside down: the spines along its back were originally thought to be legs, its legs were thought to be tentacles along its back, and its head was mistaken for its tail.

Right side up and right way round, Hallucigenia still looks pretty strange: it had pairs of lengthy spines along its back, seven pairs of legs ending in claws, and three pairs of tentacles along its neck. The animals were between 10 and 50 millimetres in length and lived on the floor of the Cambrian oceans.

In the new work, researchers used electron microscopy to examine fossils from the collections of the Royal Ontario Museum and the Smithsonian Institution, definitively sorting Hallucigenia’s front from back, and making some surprising observations.

“Prior to our study there was still some uncertainty as to which end of the animal represented the head, and which the tail,” said Smith. “A large balloon-like orb at one end of the specimen was originally thought to be the head, but we can now demonstrate that this actually wasn’t part of the body at all, but a dark stain representing decay fluids or gut contents that oozed out as the animal was flattened during burial.”

Identifying this end as the tail led Caron to revisit the fossils and dig away the sediment that was covering the head: the animals died as they were buried in a mudslide, and their floppy head often ended up pointing down into the mud. “This let us get the new images of the head,” said Caron. “When we put the fossils in the electron microscope, we were initially hoping that we might find eyes, and were astonished when we also found the teeth smiling back at us!”

The new images show an elongated head with a pair of simple eyes, which sat above a mouth with a ring of teeth. In addition, Hallucigenia’s throat was lined with needle-shaped teeth. The fossils originated in the Burgess Shale of Yoho National Park in western Canada, one of the world’s richest sources of fossils from the Cambrian period.

The ring of teeth that surrounded Hallucigenia’s mouth probably helped to generate suction, flexing in and out, like a valve or a plunger, in order to suck its food into its throat. The researchers speculate that the teeth in the throat worked like a ratchet, keeping food from slipping out of the mouth each time it took another ‘suck’ at its food.

“These teeth resemble those we see in many early moulting animals, suggesting that a tooth-lined throat was present in a common ancestor,” said Caron. “So where previously there was little reason to think that arthropod mouths had much in common with the mouths of animals such as penis worms, Hallucigenia tells us that arthropods and velvet worms did ancestrally have round-the-mouth plates and down-the-throat teeth — they just lost or simplified them later.”

The material for this study was collected between 1992 and 2000 and represents more than 165 additional Hallucigenia specimens — including many rare orientations and well-preserved specimens.

Parks Canada, which holds jurisdiction over the Burgess Shale sites located in Yoho and Kootenay national parks, is thrilled by this discovery and eager to share this exciting new piece of the ever-unfolding Burgess Shale story with their visitors.

The research was funded by Clare College, Cambridge, the Natural Sciences and Engineering Research Council of Canada, and the Royal Ontario Museum. 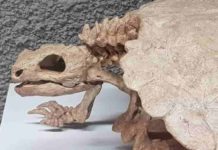 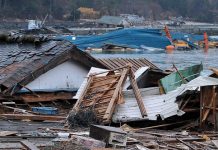 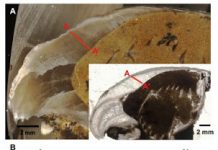 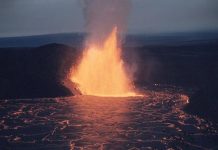