Amber is fossilized tree resin (not sap), which has been appreciated for its color and natural beauty since Neolithic times. Much valued from antiquity to the present as a gemstone, amber is made into a variety of decorative objects. Amber is used as an ingredient in perfumes, as a healing agent in folk medicine, and as jewelry.

There are five classes of amber, defined on the basis of their chemical constituents. Because it originates as a soft, sticky tree resin, amber sometimes contains animal and plant material as inclusions. Amber occurring in coal seams is also called resinite, and the term ambrite is applied to that found specifically within New Zealand coal seams.

What is the History and names of Amber?

The English word amber derives from Arabic ʿanbar عنبر, Middle Latin ambar and Middle French ambre. The word was adopted in Middle English in the 14th century as referring to what is now known as ambergris (ambre gris or “grey amber”), solid waxy substance derived from the sperm whale. In the Romance languages, the sense of the word had come to be extended to Baltic amber (fossil resin) from as early as the late 13th century, at first called white or yellow amber (ambre jaune) for disambiguation, and this meaning was adopted in English by the early 15th century. As the use of ambergris waned, this became the main sense of the word.

The two substances (“yellow amber” and “grey amber”) conceivably became associated or confused because they both were found washed up on beaches. Ambergris is less dense than water and floats, whereas amber is less dense

than stone, but too dense to float.

The classical name for amber was electrum (ἤλεκτρον ēlektron), connected to a term for the “beaming Sun”, ἠλέκτωρ (ēlektōr). According to the myth, when Phaëton son of Helios (the Sun) was killed, his mourning sisters became poplars, and their tears became the origin of elektron, amber.

Amber is discussed by Theophrastus in the 4th century BC, and again by Pytheas (c. 330 BC) whose work “On the Ocean” is lost, but was referenced by Pliny the Elder, according to whose The Natural History (in what is also the earliest known mention of the name Germania):

Earlier Pliny says that a large island of three days’ sail from the Scythian coast called Balcia by Xenophon of Lampsacus, author of a fanciful travel book in Greek, is called Basilia by Pytheas. It is generally understood to be the same as Abalus. Based on the amber, the island could have been Heligoland, Zealand, the shores of Bay of Gdansk, the Sambia Peninsula or the Curonian Lagoon, which were historically the richest sources of amber in northern Europe. It is assumed that there were well-established trade routes for amber connecting the Baltic with the Mediterranean (known as the “Amber Road”). Pliny states explicitly that the Germans export amber to Pannonia, from where it was traded further abroad by the Veneti. The ancient Italic peoples of southern Italy were working amber, the most important examples are on display at the National Archaeological Museum of Siritide to Matera. Amber used in antiquity as at Mycenae and in the prehistory of the Mediterranean comes from deposits of Sicily.

Pliny also cites the opinion of Nicias, according to whom amber “is a liquid produced by the rays of the sun; and that these rays, at the moment of the sun’s setting, striking with the greatest force upon the surface of the soil, leave upon it an unctuous sweat, which is carried off by the tides of the Ocean, and thrown up upon the shores of Germany.” Besides the fanciful explanations according to which amber is “produced by the Sun”, Pliny cites opinions that are well aware of its origin in tree resin, citing the native Latin name of succinum (sūcinum, from sucus “juice”). “Amber is produced from a marrow discharged by trees belonging to the pine genus, like gum from the cherry, and resin from the ordinary pine. It is a liquid at first, which issues forth in considerable quantities, and is gradually hardened […] Our forefathers, too, were of opinion that it is the juice of a tree, and for this reason gave it the name of ‘succinum’ and one great proof that it is the produce of a tree of the pine genus, is the fact that it emits a pine-like smell when rubbed, and that it burns, when ignited, with the odour and appearance of torch-pine wood.”

He also states that amber is also found in Egypt and in India, and he even refers to the electrostatic properties of amber, by saying that “in Syria the women make the whorls of their spindles of this substance, and give it the name of harpax [from ἁρπάζω, “to drag”] from the circumstance that it attracts leaves towards it, chaff, and the light fringe of tissues.”

Pliny says that the German name of amber was glæsum, “for which reason the Romans, when Germanicus Cæsar commanded the fleet in those parts, gave to one of these islands the name of Glæsaria, which by the barbarians was known as Austeravia”. This is confirmed by the recorded Old High German glas and Old English glær for “amber” (c.f. glass). In Middle Low German, amber was known as berne-, barn-, börnstēn. The Low German term became dominant also in High German by the 18th century, thus modern German Bernstein besides Dutch Dutch barnsteen.

The Baltic Lithuanian term for amber is gintaras and Latvian dzintars. They, and the Slavic jantar or Hungarian gyanta (‘resin’), are thought to originate from Phoenician jainitar (“sea-resin”).

Early in the nineteenth century, the first reports of amber from North America came from discoveries in New Jersey along Crosswicks Creek near Trenton, at Camden, and near Woodbury.

What is the Composition and formation of Amber ?

Amber is heterogeneous in composition, but consists of several resinous bodies more or less soluble in alcohol, ether and chloroform, associated with an insoluble bituminous substance. Amber is a macromolecule by free radical polymerization of several precursors in the labdane family, e.g. communic acid, cummunol, and biformene. These labdanes are diterpenes (C20H32) and trienes, equipping the organic skeleton with three alkene groups for polymerization. As amber matures over the years, more polymerization takes place as well as isomerization reactions, crosslinking and cyclization.

Heated above 200 °C (392 °F), amber suffers decomposition, yielding an “oil of amber”, and leaving a black residue which is known as “amber colophony”, or “amber pitch”; when dissolved in oil of turpentine or in linseed oil this forms “amber varnish” or “amber lac”.

Molecular polymerization, resulting from high pressures and temperatures produced by overlying sediment, transforms the resin first into copal. Sustained heat and pressure drives off terpenes and results in the formation of amber.

First, the starting resin must be resistant to decay. Many trees produce resin, but in the majority of cases this deposit is broken down by physical and biological process. Exposure to sunlight, rain, and temperate extremes tends to disintegrate resin, and the process is assisted by microorganisms such as bacteria and fungi. For resin to survive long enough to become amber, it must be resistant to such forces or be produced under conditions that exclude them.

The abnormal development of resin has been called succinosis. Impurities are quite often present, especially when the resin dropped onto the ground, so that the material may be useless except for varnish-making, whence the impure amber is called firniss. Enclosures of pyrites may give a bluish color to amber. The so-called black amber is only a kind of jet. Bony amber owes its cloudy opacity to minute bubbles in the interior of the resin.

In darkly clouded and even opaque amber, inclusions can be imaged using high-energy, high-contrast, high-resolution X-rays.

Classification of Baltic amber by the IAA

The oldest amber recovered dates to the Upper Carboniferous period (320 million years ago). Its chemical composition makes it difficult to match the amber to its producers – it is most similar to the resins produced by flowering plants; however, there are no flowering plant fossils until the Cretaceous, and they were not common until the Upper Cretaceous. Amber becomes abundant long after the Carboniferous, in the Early Cretaceous, 150 million years ago, when it is found in association with insects. The oldest amber with arthropod inclusions comes from the Levant, from Lebanon and Jordan. This amber, roughly 125–135 million years old, is considered of high scientific value, providing evidence of some of the oldest sampled ecosystems.

In Lebanon more than 450 outcrops of Lower Cretaceous amber were discovered by Dany Azar a Lebanese paleontologist and entomologist. Among these outcrops 20 have yielded biological inclusions comprising the oldest representatives of several recent families of terrestrial arthropods. Even older, Jurassic amber has been found recently in Lebanon as well. Many remarkable insects and spiders were recently discovered in the amber of Jordan including the oldest zorapterans, clerid beetles, umenocoleid roaches, and achiliid planthoppers.

Baltic amber or succinite (historically documented as Prussian amber) is found as irregular nodules in marine glauconitic sand, known as blue earth, occurring in the Lower Oligocene strata of Sambia in Prussia (in historical sources also referred to as Glaesaria). After 1945 this territory around Königsberg was turned into Kaliningrad Oblast, Russia, where amber is now systematically mined.

It appears, however, to have been partly derived from older Eocene deposits and it occurs also as a derivative phase in later formations, such as glacial drift. Relics of an abundant flora occur as inclusions trapped within the amber while the resin was yet fresh, suggesting relations with the flora of Eastern Asia and the southern part of North America. Heinrich Göppert named the common amber-yielding pine of the Baltic forests Pinites succiniter, but as the wood does not seem to differ from that of the existing genus it has been also called Pinus succinifera. It is improbable, however, that the production of amber was limited to a single species; and indeed a large number of conifers belonging to different genera are represented in the amber-flora.
Paleontological significance

Amber is a unique preservational mode, preserving otherwise unfossilizable parts of organisms; as such it is helpful in the reconstruction of ecosystems as well as organisms; the chemical composition of the resin, however, is of limited utility in reconstructing the phylogenetic affinity of the resin producer.

Amber sometimes contains animals or plant matter that became caught in the resin as it was secreted. Insects, spiders and even their webs, annelids, frogs, crustaceans, bacteria and amoebae, marine microfossils, wood, flowers and fruit, hair, feathers and other small organisms have been recovered in ambers dating to 130 million years ago.

In August 2012, two mites preserved in amber were determined to be the oldest animals ever to have been found in the substance; the mites are 230 million years old and were discovered in north-eastern Italy.

Note : The above story is based on materials provided by Wikipedia 1 & 2. 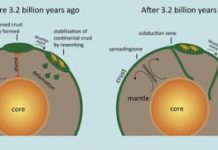 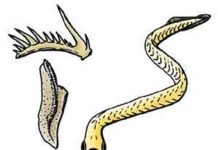 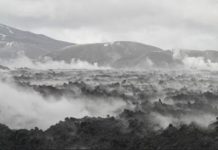 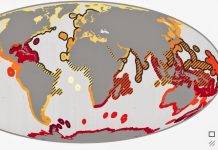