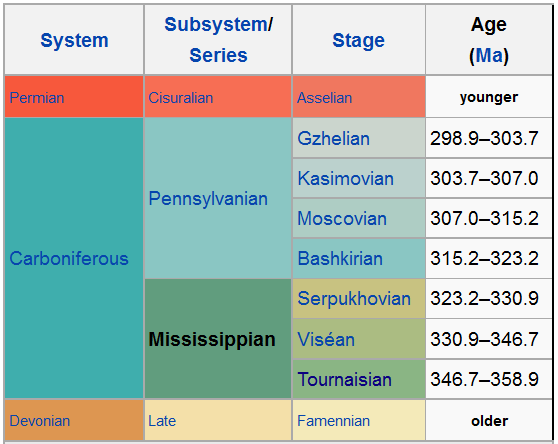 The Tournaisian is in the ICS geologic timescale the lowest stage or oldest age of the Mississippian, the oldest subsystem of the Carboniferous. The Tournaisian age lasted from 358.9 ± 0.4 Ma to 346.7 ± 0.4 Ma. It is preceded by the Famennian (the uppermost stage of the Devonian) and is followed by the Viséan.

The Tournaisian was named after the Belgian city of Tournai. It was introduced in scientific literature by Belgian geologist André Hubert Dumont in 1832. Like many Devonian and lower Carboniferous stages, the Tournaisian is a unit from West European regional stratigraphy that is now used in the official international time scale.

The Tournaisian correlates with the regional North American Kinderhookian and lower Osagean stages and the Chinese Tangbagouan regional stage. In British stratigraphy, the Tournaisian contains three substages: the Hastarian, Ivorian and lower part of the Chadian (the upper part falls in the Viséan).

The base of the Tournaisian (which is also the base of the Carboniferous system) is at the first appearance of the conodont Siphonodella sulcata within the evolutionary lineage from Siphonodella praesulcata to Siphonodella sulcata. The first appearance of ammonite species Gattendorfia subinvoluta is just above this and was used as a base for the Carboniferous in the past. The GSSP for the Tournaisian is near the summit of La Serre hill, in the commune of Cabrières, in the Montagne Noire (southern France).[5] The GSSP is in a section on the southern side of the hill, in an 80 cm deep trench, about 125 m south of the summit, 2.5 km southwest of the village of Cabrières and 2.5 km north of the hamlet of Fontès.

Recommended For You  Upper Jurassic

The top of the Tournaisian (the base of the Viséan) is at the first appearance of the fusulinid species Eoparastaffella simplex (morphotype 1/morphotype 2).

The Tournaisian coincide with Romer’s gap, a period of remarkable little terrestrial fossils, thus constituting a discontinuity between the Devonian and the more modern terrestrial ecosystems of the Carboniferous.
Note : The above story is based on materials provided by Wikipedia 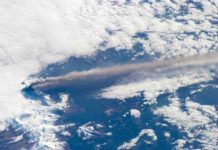