The Aleutian Trench (or Aleutian Trough) is a subduction zone and oceanic trench which runs along the southern coastline of Alaska and the adjacent waters of northeastern Siberia off the coast of Kamchatka Peninsula. It is classified as a “marginal trench” in the east as it runs along the margin of the continent.

The trench gives rise to the island arc Aleutian Islands where it runs through the open sea. The trench extends for 3,400 km from a triple junction in the west with the Ulakhan Fault and the northern end of the Kuril-Kamchatka Trench, to a junction with the northern end of the Queen Charlotte Fault system in the east. The Aleutian Trench is a convergent plate boundary. The trench forms part of the boundary between two tectonic plates. Here, the Pacific Plate is being subducted under the North American Plate at an angle of nearly 45 degrees. The rate of closure is 3in. (8 cm) per year.

The Aleutian Islands  are a chain of 14 large volcanic islands and 55 smaller ones, forming part of the Aleutian Arc in the Northern Pacific Ocean, occupying an area of 6,821 sq mi (17,666 km²) and extending about 1,200 mi (1,900 km) westward from the Alaska Peninsula toward the Kamchatka Peninsula, marking a line between the Bering Sea and the Pacific Ocean. Crossing longitude 180°, they are the westernmost part of the United States . Nearly all the archipelago is part of Alaska and usually considered as being in the “Alaskan Bush”, but at the extreme western end the small, geologically related, and remote Commander Islands are in Russia. The islands, with their 57 volcanoes, are in the northern part of the Pacific Ring of Fire. The Alaska Marine Highway (a ferry service) passes through the islands.

The north side of the trench slopes 3°–4° and the south side l°–4°. This process has created the Aleutian Arc. The deepest part of the Aleutian trench has been measured at 7,822 metres (25,663 ft) at 51.21°N, 174.83°E., located about 145 km SSW of Buldir Island. North of the trench, a string of volcanoes and associated islands have formed where melting of the crust has been caused by the descending plate beneath them. Center pressure: 10762psi (732atm), 74 MPa (732atm) Metric units.[ Variations in total magnetic intensity (residual) of more than 600 γ were found in the center of the trench and more than 1100 γ on the southern flank. 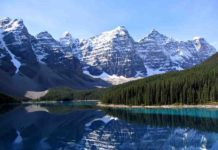 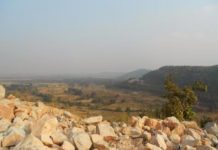 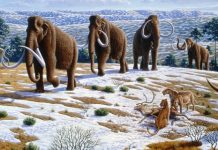 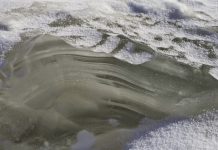