A new analysis suggests that massive earthquakes on northern sections of the Cascadia Subduction Zone, affecting areas of the Pacific Northwest that are more heavily populated, are somewhat more frequent than has been believed in the past.

The chance of one occurring within the next 50 years is also slightly higher than previously estimated.

The findings, published this week in the journal Marine Geology, are based on data that is far more detailed and comprehensive than anything prior to this. It used measurements from 195 core samples containing submarine landslide deposits caused by subduction zone earthquakes, instead of only about a dozen such samples in past research.

The work was done by researchers from Oregon State University, Camosun College in British Columbia and Instituto Andaluz de Ciencias de la Tierra in Spain. The research was supported by the National Science Foundation and the U.S. Geological Survey.

“These new results are based on much better data than has been available before, and reinforce our confidence in findings regarding the potential for major earthquakes on the Cascadia Subduction Zone,” said Chris Goldfinger, a professor in the College of Earth, Ocean and Atmospheric Sciences at OSU, and one of the world’s leading experts on tectonic activity of this subduction zone.

“However, with more detailed data we have also changed somewhat our projections for the average recurrence interval of earthquakes on the subduction zone, especially the northern parts. The frequency, although not the intensity, of earthquakes there appears to be somewhat higher than we previously estimated.”

The Cascadia Subduction Zone runs from northern California to British Columbia, and scientists say it can be roughly divided into four segments. There have been 43 major earthquakes in the past 10,000 years on this subduction zone, sometimes on the entire zone at once and sometimes only on parts of it. When the entire zone is involved, it’s believed to be capable of producing a magnitude 9.1 earthquake.

It’s been known for some time, and still believed to be accurate, that the southern portions of the subduction zone south of Newport, Oregon, tend to rupture more frequently — an average of about every 300-380 years from Newport to Coos Bay, and 220-240 years from Coos Bay to Eureka, California.

The newest data, however, have changed the stakes for the northern sections of the zone, which could have implications for major population centers such as Portland, Tacoma, Seattle and Vancouver, B.C.

The last major earthquake on the Cascadia Subduction Zone — pinpointed in time because it caused a tsunami that raced all the way across the Pacific Ocean to Japan — occurred in January, 1700, more than 315 years ago.

“What this work shows is that, contrary to some previous estimates, the two middle sections of the Cascadia Subduction Zone that affect most of Oregon have a frequency that’s more similar than different,” said Goldfinger, who directs the Active Tectonics and Seafloor Mapping Laboratory at OSU.

Based on these findings, the chances of an earthquake in the next 50 years have also been slightly revised upwards. Of the part of the zone off central and northern Oregon, the chance of an event during that period has been changed to 15-20 percent instead of 14-17 percent. On the furthest north section of the zone off Washington and British Columbia, the chance of an event has increased to 10-17 percent from 8-14 percent.

The study also increased the frequency of the most massive earthquakes, where the entire subduction zone ruptures at once. It had previously been believed this occurred about half the time. Now, the data suggest that several partial ruptures were more complete than previously thought, and that complete ruptures occur slightly more than half the time.

“Part of what’s important is that these findings give us more confidence about what’s coming in our future,” Goldfinger said.

“We believed these earthquakes were possible when the hypothesis was first developed in the late 1980s. Now we have a great deal more certainty that the general concern about earthquakes caused by the Cascadia Subduction Zone is scientifically valid, and we also have more precise information about the earthquake frequency and behavior of the subduction zone.”

Based in part on the growing certainty about these issues, OSU has developed the Cascadia Lifelines Program, an initiative working with Pacific Northwest business and industry to help prepare for the upcoming subduction zone earthquake, mitigate damage and save lives. Many other programs are also gaining speed.

The new measurements in this research were made with cores that showed the results of massive amounts of sediments released by subsea landslides during a subduction zone earthquake — a catastrophic event beneath the sea as well as on land. New technology is helping researchers to actually simulate these underwater landslides, better understand their behavior, and more accurately identify the “turbidite” or sediment layers they leave behind.

The large amounts of additional data, researchers say, has helped refine previous work, fill holes in the data coverage, and also to rule out other possible causes of some sediment deposits, such as major storms, random landslides or small local earthquakes. 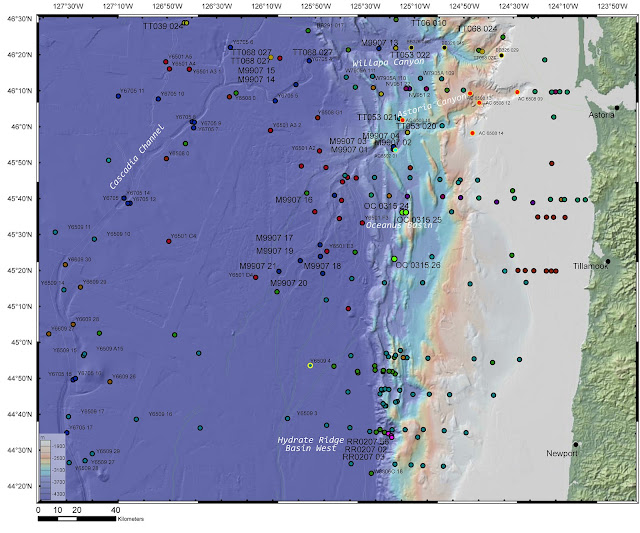 Core samples of sediments on the ocean floor were taken at these locations.
Credit: Image courtesy of Oregon State University