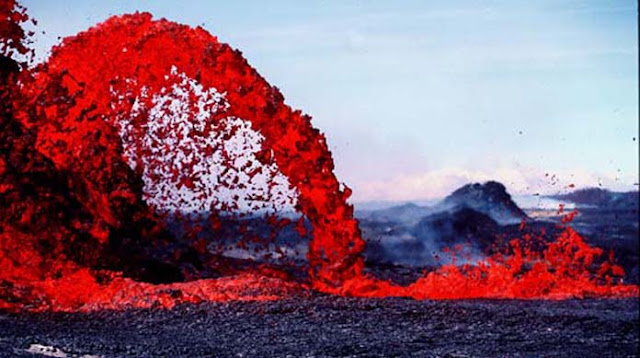 A collaborative research team has discovered an important link between the eruption of Earth’s hottest lavas, the location of some of the largest ore deposits and the emergence of the first land masses on the planet – the continents – more than 2500 million years ago.

The research team includes researchers from the Centre for Exploration Targeting at The University of Western Australia and Curtin University, which are key nodes of the ARC Centre of Excellence for Core to Crust Fluid Systems, in collaboration with colleagues from CSIRO and the Geological Survey of Western Australia.

The generation and evolution of the Earth’s continental crust has played a fundamental role in the development of the planet. Its formation modified the composition of the Earth’s interior, contributed to the establishment of the atmosphere and led to the creation of ecological niches, essential for early life.

The study, published today in the prestigious international journal Proceedings of the National Academy of Sciences, used a combination of different radiogenic isotopes to show that in the early evolutionary stages of our planet, the formation and stabilisation of continents also controlled the location and extent of major komatiite volcanic eruptions.

“They are the signature rock type of a hotter Earth in the primordial stages of its evolution, and provide the most direct link between the Earth’s interior and the Earth’s surface,” Professor Fiorentini said.

Recommended For You  East African Rift System is slowly breaking away, with Madagascar splitting into pieces

“They locally contain some of the largest known deposits of metals such as nickel, cobalt and platinum. Due to the unique geological processes that led to the formation of komatiites, they represent a rare window into the development of the innermost parts of our planet, notably the deep and inaccessible mantle and core.”

Focusing on the Yilgarn Craton of Western Australia as a natural laboratory, the research team combined sophisticated geochemical and isotopic techniques to unveil the progressive development of an Archean micro-continent.

“This ‘cratonisation’ process formed deep roots to the continental land masses, extending more than 200km deep into the Earth,” he said. “The roots drove the hottest and most voluminous komatiite eruptions to the edge of established continental blocks. The ability to map these continental blocks through time points to the location where major metal deposits formed in these lavas.”

As a result, the dynamic evolution of the early continents directly influenced where deep mantle material was added to the Archean crust, oceans and atmosphere.

The complex interaction between the eruptions of some of the hottest lavas that ever existed on the planet, with the emergence of the first continents, provided a fundamental control on the distribution of major ore deposits. It also had an irreversible impact on the nature of the terrestrial biosphere-hydrosphere-atmosphere.

Note : The above story is based on materials provided by  University of Western Australia